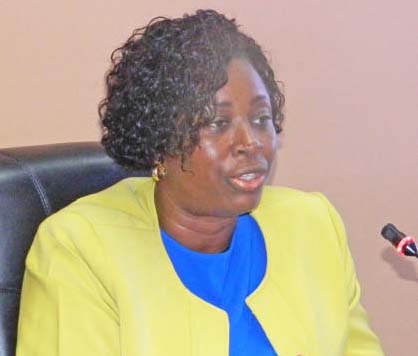 Minister Lewis has come under fire after she posted pictures on social media where she is seen posing with young students from two primary schools, Belair Government School and the Sacred Heart Roman Catholic School, Tivoli wearing face masks branded with her image.

In responding to THE NEW TODAY on the issue, Minister Pierre conceded that the action of her colleague was not in keeping with Ministry of Education policy and the requirements for people entering schools to distribute items.

“Definitely I do not endorse the activity,” she said.

The social media post was quickly taken down after being posted on Wednesday but not before it went viral and became a major talking point among Grenadians, many of whom have taken deep offence to the mask distribution.

Minister Pierre explained that she has raised the matter with her colleague who is the Parliamentary Representative for St Andrew North East and also the Minister responsible for Youth Development in the Prime Minister’s Ministry.

“I had a conversation with Minister Lewis and I believe that she understands that this cannot be done and it is not in keeping with our policy. Political material should not be distributed in schools,” she said.

While Minister Pierre acknowledged the violation of policy, she also called the move by the former secondary school teacher “genuine”.

“I believe that she genuinely attempted to assist students who needed a mask to protect themselves and she must be applauded for this but obviously the approach used did not fit the policy of Government and she has agreed to discontinue the distribution to schools in her constituency.”

While the United Nations charter on the Rights of the Child says that children have a right to a say in how their communities are shaped and a right to freedom of expression, the blatant use of children and the images of children for partisan political game is highly frowned upon.

During the 2018 general elections campaign Minister Pierre also used children and the images of children to further her political interests.

Several years ago Civil Society developed a set of election campaign guidelines for parties and among them was that children would not be used for campaign purposes.

At the time Pierre’s New National Party (NNP) was the only political organisation on the island which did not sign onto the Charter.

The Grenada Movement (TGM), a new Non-Governmental Organisation (NGO) which is chaired by Dr. Patrick Antoine has called the actions of the Youth Minister a “shocking act of political exploitation of our nation’s children”.

In a statement issued Friday, TGM said the group is calling on the Prime Minister “to act in the public interest and take measures that in his judgment are appropriate for this shocking act of political exploitation of our nation’s children.”

“The Grenada Movement wishes to state that collectively, we are shocked at the latest display of insensitivity, disregard for the concept of decency, exploitation of minors and the attempt to create a cult of personality, evidenced by the recent “gift” of face masks to the pupils……”, the TGM statement said.