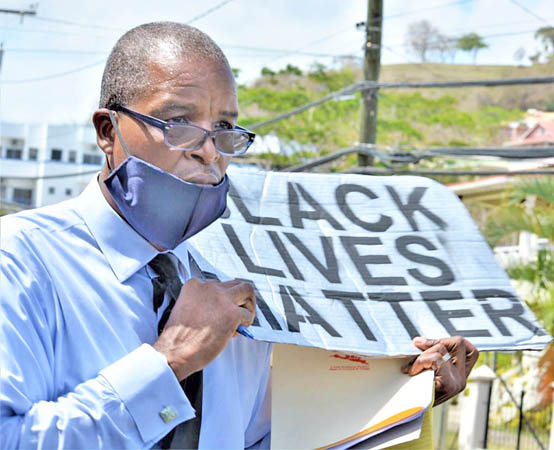 In the face of an apparent warning from Acting Commissioner of Police Edvin Martin, American-trained attorney-at-law, Jerry Edwin proceeded to lead a group of protestors outside the U.S Embassy in Lance Aux Epines on Monday in a show of solidarity for Afro-Americans following the May 25 killing of George Floyd by a white police officer in Minneapolis.

The killing of Floyd has sparked off widespread protest in several cities across the United States and in countries around the world including Europe and Australia against violence against Blacks and minority groups.

Edwin told THE NEW TODAY that Commissioner Martin indicated to him on the eve of the event that he needed to seek the permission of the Royal Grenada Police Force (RGPF) to stage the peaceful protest as the island was under a “lockdown” due to an ongoing State of Emergency.

The defense lawyer said that the thinly veiled threat from the island’s top cop came after he had contacted Martin seeking the assistance of the police to provide security during the protest action and for an ambulance to be sent there in case of an emergency.

According to Edwin, he told Commissioner Martin emphatically “no” to any request by him to seek permission since “in the encyclopedia of protests, the organisers never ask for permission”.

“I don’t know what hymn book you (The Commissioner) are reading from but we are on the opposite side,” the lawyer told the COP.

According to Edwin, he did not want to be antagonistic towards the head of the local police force but the fact of the matter is he had to inform him as best he can that ”I am not asking you for permission to stage a protest”.

“He (Martin) wrote me a letter, I think he thought that he was going to intimidate me to say, just remember you didn’t get permission and I just ignored him”.

The attorney said that Martin also told him in the letter, “the police have not authorised this (protest) and be mindful that we are in a COVID situation and read the regulations. I took it to mean that the Police Commissioner misunderstood his role in society”.

“He (Martin) probably believes that his role is to moderate the voice of constitutional freedom … so I think he was a little bit out of his depths,” he added.

According to Edwin, the Commissioner of Police did not seem to understand that he had a responsibility to recognise the constitutional right of people to stage peaceful protest action and to assist by providing the necessary support services.

“I would have been very disappointed if he (Martin) took any other step than the one that he took which was to comply with our request for the presence of officers there,” he added.

Edwin spoke of spotting in the area of the protest about four police officers including one holding a very senior rank, as well as three Traffic Wardens.

The attorney praised the efforts of the police who were present to maintain law and order especially in the manner in which they controlled the flow of traffic along the road and to allow people to exercise their constitutional rights of assembly and free speech.

He said that the Charge d’Affaires at the U.S Embassy placed a telephone call to him during the protest action to engage him in a conversation.

He said the American envoy expressed full-throated support for the protest outside the embassy.

“The Charge (D’affaires) gave full support for what we were doing,” he quipped.

According to Edwin, the American diplomat indicated to him that he and his wife had watched the video showing the killing of Floyd by the white policeman and ever since kept thinking of how could they get involved in some kind of a reconciliation with the Black Community.

“I expressed (to him) that he will want to be part of any further discussion with respect to reconciling racial inequalities as we perceived them for our communities abroad.

Edwin disclosed that the Charge D’affaires “has invited us to a conversation any time in the future around these issues”.

The attorney was also asked to comment on the apparent failure of the Minister of Foreign Affairs, Peter David who is also in charge of Diaspora matters to offer any support to the protestors who assembled outside the U.S Embassy to show solidarity to the Black Community in the United States.

He said: “Speaking for the safety of our Diaspora community is a job left to the Ministry of Foreign Affairs. It is the Minister who should have run out there first and issued a statement …. and Ministers of Foreign affairs across the region with huge Diaspora communities in New York City and in the rest of America to say to the American President, hands off our Diaspora”.

According to Edwin this was the message that the protestors took Monday outside the Embassy in St. George in solidarity with the black community in the United States.

The attorney also threw out a word of advice to his colleagues who stayed away from the protest action.

He said: “Lawyers are the last real protection for constitutional freedoms in any democratic society. When lawyers believe that they are somehow constrained in expressing or protecting these rights the whole society is in problem – we are in trouble.

“We are at the whim of State actors who could likely exercise their State privileges to the detriment of citizens. Lawyers are critical to ensuring constitutional freedoms are maintained for people.

Apart from Edwin, the only other lawyer who took part in the protest was the British-born Dawne DeCouteau of Grenadian parenthood who is now living on the island and practicing her profession.

The lawyer said that he was determined to stage the protest action because in past years, Blacks in America will stage protest action against injustices and prejudices against them without getting any “fraternal support” from the people back home in the Caribbean.

He said the intention was to send a message through the action in front of the US embassy to them that “Grenadians love you, we care about you, we care about your safety and we have to say something to the United States government about military force being used in your peaceful protest”.

He described the artiste as “a cultural tour-de-force” who was quite amazing with the lyrical content of the song performed outside the U.S Embassy as it evoked the Black gospel tradition in the United States.