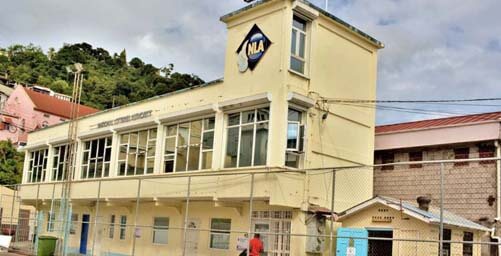 A high court judge in Grenada has delivered a ruling in which the state-owned Grenada National Lottery Authority (GNLA) will have to pay out more than half-a-million dollars to a man who won a big sum in one of its games of chance but they did not acknowledge the winning numbers.

The judgment was handed down on July 31 by Justice Agnes Actie in favour of Jerome De Roche who was represented by Attorney-at-law, Ruggles Ferguson of Ciboney Chambers.

The court heard that DeRoche who is believed to be Vincentian-born but came to Grenada to live many years ago only knew he won when he visited the GNLA office and saw the numbers played for that game on November 4, 2017 on a board inside the office.

The Lottery Authority did not want to acknowledge the winner on the grounds that the ticket related to a game held the day before that was cancelled.

De Roche then sought legal advice from Ciboney Chambers who challenged the matter in court.

Following is the ruling handed down in the case by Justice Actie: 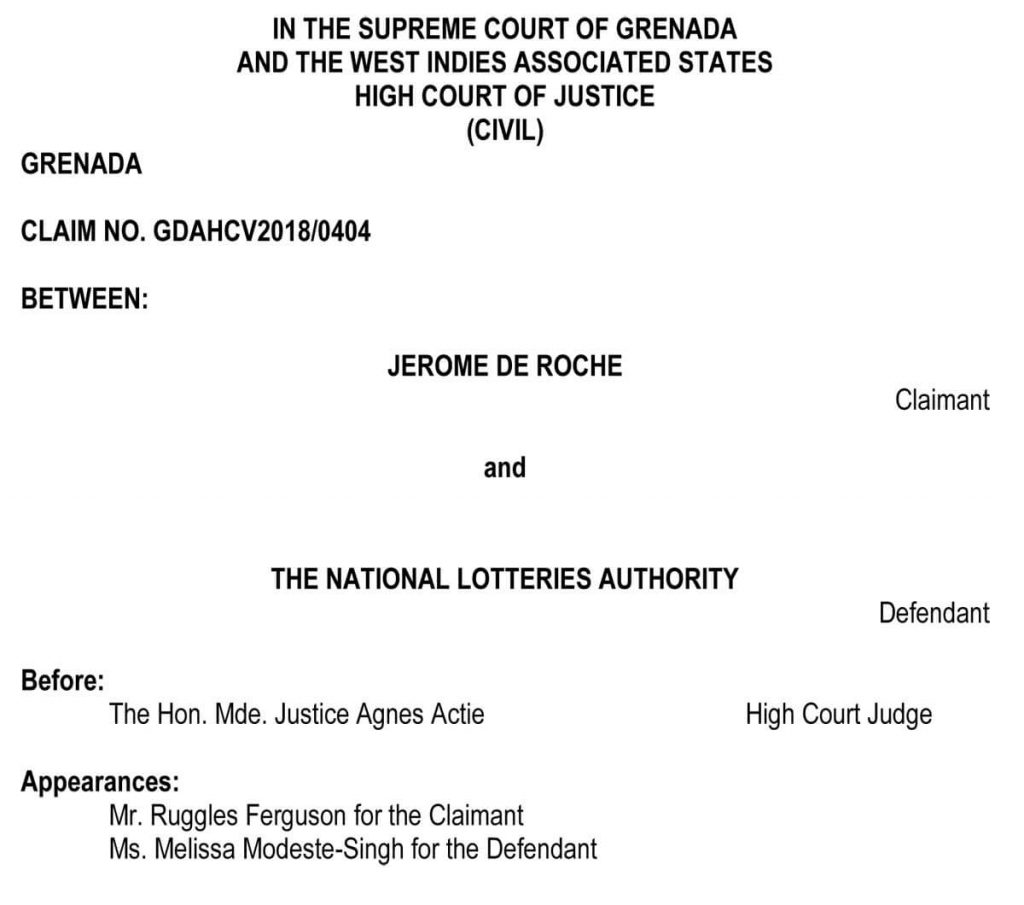 JUDGEMENT
[1] ACTIE, J.: This claim concerns whether the National Lotteries Authority is holding the sum of $540,000.00, on trust for the claimant for the jackpot of the Super 6 prize, which took place on Saturday, 4th November, 2017.

The Claimant’s case
[2] The claimant, (Mr. De Roche) in his statement of claim filed on 12th October 2018 says that on Friday 3rd November 2017 he purchased a Super 6 Lotto ticket from an agent of the National Lotteries Authority (Lotteries Authority) at Parris Pharmacy in Grenville, Saint Andrew for a draw on that same date. The draw instead took place on Saturday, 4th November 2017 and the winning prize of $540,000.00 was announced. Mr. De Roche visited the Lotteries Authority’s outlet in St. George’s and recognised that the numbers drawn for the Saturday draw were the numbers he had played. He presented his ticket but was informed by the Lotteries Authority’s agent that the Friday ticket was invalid as the draw was cancelled. Upon further enquires Mr. De Roche discovered that the information given by the agent was misleading, but by then he had lost his ticket.

[4] Mr. De Roche states that the Lotteries Authority breached its duty as constructive trustee to act honestly and in good faith and pleaded particulars of a series of fraudulent actions designed to mislead and deprive him of his winnings.

[5] Mr. De Roche therefore claims for special and or general damages for breach of contract and/or an order directing the Lotteries Authority to pay the said sum of $540,000.00 held on trust for him together with interest, costs or other reliefs

Evidence of Mr. De Roche
[7] The salient points in Mr. De Roche’s witness statement filed on 15th November 2019 and evidence at trial are that:

(1) On Friday, 3 November 2017, he purchased a Super 6 lotto ticket bearing number 08 10 11 19 26 28 from an agent of the Lotteries Authority, Parris Pharmacy located at Victoria Street, Grenville, Saint Andrew operated by Dr. Reginald Buckmire PHD MBE. He said he regularly buys Play Way and Lotto tickets, but this was the first time he bought and played a Super 6 ticket.

(2) After he purchased the ticket, he watched the television and listened to the radio to hear the announcements for the Super 6 draw on Friday, 3rd November 2017, but did not hear any announcements.

(3) On 7th November 2017, he went to cash the play way ticket that he won at the Lotteries Authority’s office in the Bruce Street Mall. While at the office he saw the Super 6 numbers displayed on a board and recalled that the numbers were the same that he played on his Super 6 ticket.

(4) He went to the agent at the desk of the lotto office, cashed his play-way ticket and received $600.00. After cashing the play way ticket, he inquired from the agent when the Super 6 numbers were announced as he did not see them on the Friday night. The agent informed him that the Super 6 lotto was played on Saturday, 4th November 2017.

(6) Being dissatisfied with the response he received from the agent, he went to see the Manager of the Lotteries Authority, Mr. Gilbert, at the main office on the Carenage, St. George’s on the same day, Tuesday 7th November 2017, but the Secretary to the Manager informed that he was not in office. He returned to the office on Wednesday, Thursday and Friday of that same week, but was again unsuccessful as he was informed that the Manager was not in office.

(7) On Saturday, 11th November 2017 at around 8 am, he met the Manager, Mr. Gilbert, in a junction at the Bocas. He informed Mr. Gilbert of his several trips to his office. He then asked Mr. Gilbert whether the Super 6 tickets purchased on Friday would be valid if the draw was announced on the Saturday. Mr. Gilbert replied that the ticket was valid and states that there was no draw on Friday as there was a holiday in the Commonwealth of Dominica, one of the participating islands in the Super 6 Lotto.

(8) Mr. De Roche had accidentally thrown away his ticket on Saturday morning 11th November 2017 at about 5 am, when he usually puts out his garbage for the truck. Mr. Gilbert informed him that if he could not find the ticket, he will see what he can do. On Monday 13th November 2017, he visited Mr. Gilbert at the Lotteries Authority’s office. Mr. Gilbert inquired whether he knew the numbers of the ticket. Mr. De Roche informed him that the numbers were 08, 10, 11, 19, 26, 28. Gilbert then told Mr. De Roche that he would send him to obtain a print-out from the place of purchase and that he had to wait for 3 months. He inquired when will the print-out be available to which Mr. Gilbert replied by the middle of January 2018.

[8] The court notes the inconsistent statement of Mr. De Roche in his pleadings where he stated that he lost the Super 6 ticket on Saturday 4th November 2017 when he visited the Lotteries Authority’s office in St. George’s. However, Mr. De Roche in his witness statement and in his evidence at trial clarified that inconsistency and stated that he lost the ticket on Saturday, 11th November 2017. This inconsistency was not specifically challenged by the defence and in the court’s view, it is also not fatal to his claim since it is not in dispute that Mr. De Roche lost or misplaced the physical Super 6 lotto ticket.

Evidence of Dr. E. Reginald Buckmire
[9] On 15th November 2019, Dr. Buckmire, the owner of Parris Pharmacy in Grenville, Saint Andrew filed a witness statement in support of Mr. De Roche’s claim. Dr Buckmire says that he recalls hearing a radio and television announcement sometime on Monday after the draw on Saturday 4th November 2017 that the winning ticket was purchased from Parris Pharmacy. After the announcement Dr. Buckmire says that Mr. De Roche came to the Pharmacy to say that he won but had thrown away the ticket.

[10] Dr. Burkmire states that “Mr. Jerome told me on one occasion which was a day or so before the 30th January 2018 that the general manager told him to get a printout of the sales”. He says that he informed Mr. De Roche that he does not understand why he was sent for a print-out when all the information is at the head office.

[11] Mr. De Roche returned on January 30th 2018 for the printout but Dr. Buckmire recalls that he was unable to view the sale records for the month of November 2017, although he was able to see the preceding and following months. Upon inquiry, Dr. Buckmire said that he was informed by his staff member, Jenny Tobias, that Mr. Beggs from the Lotteries Authority serviced the terminal. Dr. Burkmire says that he found this was strange as he had seen the sales records for November 2017 before the machine was serviced. Dr. Burkmire further states that servicing of the machine or terminal is usually done at the request of the agent, however, on this occasion the Lotteries Authority showed up unannounced.

[12] Dr. Buckmire says that he called the Lotteries Authority’s office, but they informed him that the ticket was purchased from their Grenville sub-office not from Parris Pharmacy. He said he found this information to be odd given the previous announcement on radio and television. Dr. Buckmire alleges that he received a call from the General Manager of the Lotteries Authority saying that he should forget Mr. De Roche.

[14] Ms. Tobias recalls that on two occasions, Dr. Buckmire tried to obtain a print-out of the sale history but was unable to find anything in relation to the record for the month of sale as the lotto machine’s screen was blank. Ms. Tobias says that she was also present when an agent from the Lotteries Authority came to service the machine/terminal. He took the terminal to the back of the Pharmacy, serviced it and returned it to its original location before Dr. Buckmire arrived. She says that it was on that same day, after the servicing was done that Dr. Buckmire was unable to retrieve the sales history and the printout for Mr. De Roche.

[17] Mr. Craig Bascombe, President of Lottery Systems and Chief Financial Officer of Canadian Bank Note Company Limited (CBN) with its headquarters in Canada, in his witness statement in support of the defence, says that CBN operates and manages the Super 6 Lotto which is multi-island jackpot game. He says that CBN owns the point-of-sale terminal in Grenada and the back-end server used to administer the Super 6 Lotto games. Mr. Bascombe says that all communication between the lottery point-of-sale devices and the back-end server are encrypted while in transit and the back-end gaming server is located in St. Lucia at CBN St. Lucia Inc.

[18] Mr. Bascombe says that only employees of CBN and CBN St. Lucia Inc. have access to the gaming servers and can confirm that CBN had not deleted or altered any gaming data in its system related to any Super 6 Lotto draws. In relation to the draw on 4th November 2017 he says that there was a winning Super 6 ticket, and the system reveals that the said winning ticket for draw 1761 was purchased on 4th November 2017 and sold at Grenville, Grenada (Retailer No. 2) and not at a pharmacy in Grenville.