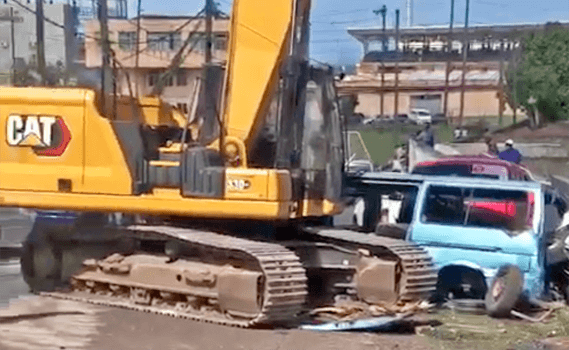 It was a lucky escape on Tuesday for the driver of an Excavator belonging to the state-controlled Gravel Concrete & Emulsion Production Corporation.

THE NEW TODAY understands that the driver lost control of the vehicle coming down the steep incline at Mt Rush, overlooking the power plant of Grenlec at Queen’s Park.

A resident of the area said that no one was injured in the mishap.

He spoke of three vehicles parked on the side of the road that were hit by the Excavator as it came downhill with great speed.

There are reports that only one of the vehicles is in good condition with the other two considered as abandoned and out of use.

The villager said the usable vehicle suffered “good damage” as the Excavator ramped into it.

He stated that the Gravel & Concrete vehicle also hit a utility pole and the street light fell off it.

He said it appears that the Excavator was coming down the hill and soon ran into difficulties due to the fact that the concrete surface used as road might have been too smooth for its tyres.

He said it was a good thing that no one or vehicle was coming up the hill as the driver lost control of the Excavator.

The Traffic Department of the Royal Grenada Police Force (RGPF) was called in to help investigate the road mishap.