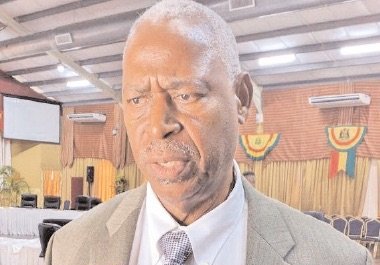 Agriculturalist Dr Dunstan Campbell has resigned from the Upper House of the Grenada Parliament where he served as the Senator representing farmers and fishers, citing health issues for his departure.

A new representative will have to be elected by organisations representing the agriculture and fisheries industries.

The former Senator informed the Governor General of his immediate departure from the Senate on September 2, with immediate effect and during Friday’s sitting members of the Senate paid tribute to Dr Campbell for his contributions in the Upper House and to national development.

He was described by Senate President Chester Humphrey as profound, with a mild demeanour, quiet but thorough.

Humphrey noted Dr Campbell’s origins from “the bowels of the working class” and thanked him for his advocacy on behalf of farmers and fisher folk.

He praised the efforts of Dr Campbell in the struggle to complete the emancipation and liberation of Grenada’s poor.

Andre Lewis, the Senator representing the Labour Movement said Dr Campbell is a “comrade” that Grenada failed to make sufficient use of in formulating policies and long term planning for the Nation.

He cited the former Senator’s work in Jamaica, saying that “he played a significant role in Jamaica in terms of long-term planning for that island”.

Dr Campbell has worked diligently to help formulate policies for the resuscitation and development of Grenada’s agriculture sector.

He also worked to resuscitate the island’s banana industry after returning home from abroad.

In 2019, he spoke out against illegal fishing in Grenada’s waters, calling for a task force to be established to investigate the claims.

In a letter to the Senate President, Dr Campbell expressed sadness at having to cut short his term as a Senator and also singled out the youths and the youth Senators for specific praise.

“I have seen the future and it looks good,” he wrote.

“I have seen the youths take their stand.”

No replacement has been announced to fill the vacant seat in the Upper House and it will be up to the farmers and fishers organisations to recommend a suitable candidate to Governor General Dame Cecile La Grenade.

The former UWI lecturer was appointed to the Senate in April 2018 after being elected by groups representing agriculture and fisheries.

He had replaced Keith Clouden who served for fifteen years.

Dr Campbell has served on various agriculture boards and organisations regionally and internationally.