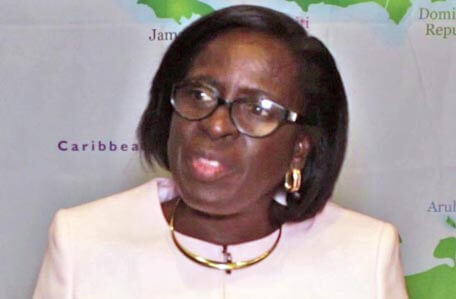 Dr. Clarice Modeste-Curwen is getting ready to defend her St Mark seat

Tourism & Civil Aviation Minister Dr. Clarice Modeste-Curwen is gearing up for another run in the rural St. Mark constituency in the upcoming general election.

Informed sources told THE NEW TODAY that plans are in the making to put structures in place for Curwen-Modeste to contest her sixth election for the seat that she has retained since contesting her first poll in 1999.

There were reports inside the ruling New National Party (NNP) that the veteran female politician who is a medical doctor by profession was thinking of bowing out of frontline politics after the 2018 poll.

However, an insider said that a senior member of the party’s head office at Mt. Helicon on upper Lucas Street in St. George has been making telephone calls to key persons to help in the upcoming campaign for the senior government minister.

He spoke of a prominent Grenadian campaign organiser now living outside of the country being called on the telephone in the past few days to attract him to return home to help in the promotion of Modeste-Curwen.

With the senior government minister preparing to run in another election, it could be a long wait for those within the party known to be eyeing the job as successor.

The list is said to include Shawn Charles, the newly appointed Chairman of the now government-controlled Grenada Electricity Company (GRENLEC).

St. Mark is considered as one of the two garrison constituencies for the NNP as the party has never lost it since 1984.

According to the official, the message that came from the NNP employee is that Prime Minister Dr. Keith Mitchell wants “all hands on deck” as the NNP prepares for the election that is due in 2023 but which political observers are predicting will be held sometime next year.

A party insider said that whenever the Grenadian leader speaks in such a manner it means that “the troops” are being prepared for action with an election very close at hand.

Speculation is rife that all three senior political figures in the NNP hierarchy including the ageing Prime Minister Mitchell (St. George North-west) and his deputy Gregory Bowen (St. George South-east) will be facing the poll in the upcoming general election.

The NNP has been the dominant political party in Grenada’s recent electoral history winning six of the last 8 general elections following Grenada’s return to Westminster parliamentary system of government after the brief period of Marxist rule by the left-leaning People’s Revolutionary Government (PRG) of executed Prime Minister Maurice Bishop.