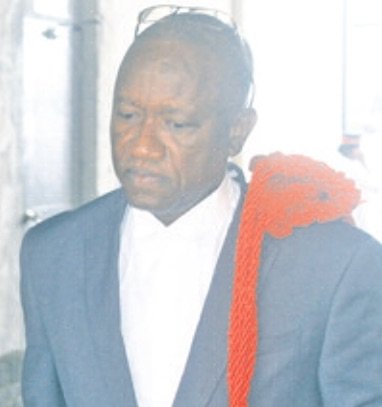 DPP Christopher Nelson . -the sentence is not manifestly inadequate

The suspended 12-month prison term handed down on a St. Mark’s resident by Magistrate Teddy St. Louis for indecently assaulting a 4-year-old girl, has left a bitter taste in the mouths of many persons in the country.

However, Director of Public Prosecutions (DPP), Christopher Nelson has come to the aid of the Magistrate by pointing out that the sentence was well within the realm of sentences that can be handed down for the offence committed based on the existing  law.

The toddler’s outraged mom took to Social Media to voice her disgust with the sentence handed down on 45-year-old, Mike Alexander of Waltham, who is popularly known as ‘DJ’ in the community, prompting many others who viewed the public post to also vent their feelings on the matter.

Alexander, who had posted bail in the sum of $5, 000, on the occasion of his first court appearance pleaded guilty at the Victoria Magistrate’s Court, to committing the crime against the child, who is now five (5) years old between October 2017 and October 2018.

THE NEW TODAY understands that around March 29, the sex offender was given a sentence of 12 months confinement, which has been suspended for a period of one (1) year, which means that if he finds himself in trouble with the law within a year after the sentence is handed down to him, the prison term would take effect.

Alexander was also fined $3,500.00 for the offence and in default serve time in prison.

THE NEW TODAY was unable to ascertain the period within which the fine must be paid, however, it is understood that he faces a default sentence of 1-year behind bars.

According to the Criminal Procedure Code, the offence of Indecent Assault carries a maximum penalty of 10 years imprisonment at the level of the High Court and five (5) years at the Magistracy.

Statistics emanating from the Office of the Director of Public Prosecution show that sexual offence have been dominating the cause list in recent years.

According to DPP Nelson QC, on average sentences handed down specifically for Indecent Assault is 18 months at the level of the High Court.

In commenting on the sentence handed down by Magistrate St. Louis on Alexander, who is a first-time offender, the DPP told this newspaper last week Thursday that in spite of the widespread debate and differences of opinion among the populace in relation to the matter “a fine and a year (prison term), albeit suspended, is not in the scheme of things, a very lenient sentence”.

“It may be on the lower side but nonetheless appropriate for the nature of the offence (that) he (the sex offender) pleaded guilty to and the nature of the facts related to the court…it is not a sentence that we can say is manifestly inadequate or lenient”, he said.

DPP Nelson went on to say: “There is no evidence to suggest that this child was ravished, physically injured, damaged or scared in any way…no one saw, no one heard (what happened) and the mother observed nothing untoward with the child”.

THE NEW TODAY has heard some of the utterances made by the irate mother on a current social media programme, where she admitted that she was not aware of what was happening and only learned of the incident approximately a year ago during a conversation with a young daughter.

According to DPP Nelson, the case can be considered as a “success in a sense that there is a conviction recorded against the perpetrator, who pleaded guilty to the offence but that it was also challenging in light of the age of the victim.

“This is a child of five (5) years of age and bear in mind it would be great difficulty for that child to give evidence for recourse and particularly giving evidence on oath. So, there were challenges with that case,” the DPP said, admitting however, that legislative action is needed to enhance the laws governing these types of offences and alleviate some of the challenges.

“There is room for improvement to make prosecuting in relation to child offenders easier,” he said, citing the “Criminal Procedure Code and the Evidence Act, (which) can be improved to create a better framework for dealing with these cases.”

In addressing the outcome of the case, Social Development Minister Delma Thomas used a recent sitting of the Lower House to call for persons to refrain from making negative comments relating to the matter on social media due to the unwarranted effect it can have on the young girl in the future.

“We are aware that there has been some widespread comments about the results of a particular case in the court…I understand that it is a vexing issue and that as mothers we are upset but with all the emotions we have to ensure that while we are speaking in public domain that we do not create more harm that good on the child..”, she said.

“I urge our people who are writing on social media, those who are commenting, let us also think about the child and the effect that it can have on her by what we are doing at present,” she added.

The minister did not indicated if there would be a review by the Cabinet of Ministers of the law in relation to child offenders.

However, longstanding Parliamentary Representative, for St. Mark, Dr. Clarice Modeste-Curwen cited a need for legislative review in light of the current case in the public domain.

She told Parliament: “I believe that there are some laws in this country that need to be reviewed with great urgency. Very seriously, the manner in which things are done need to be looked at. There are various entities and ministries that have more stake in doing that (review) than others and I think it is a wake-up call for everyone who has a responsibility to do more, effectively and efficiently so that justice can be served…we believe that the scourge of sexual abuse has to be dealt with in our country”.