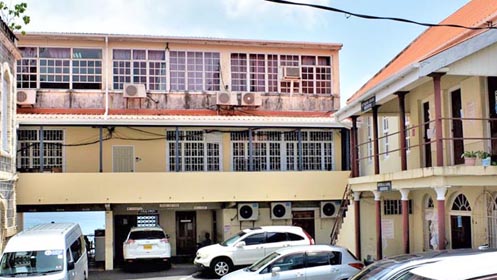 A government-appointed team of health experts is calling for the closure of the Office of the Director of Public Prosecutions (DPP) due to serious health concerns.

A senior member of the ruling New National Party (NNP) government of Prime Minister Dr. Keith Mitchell has told THE NEW TODAY that he understands that this is one of the recommendations to be submitted for consideration by the health experts who visited several government ministries and departments to access their health situation.

He said that this “COVID-19” Health Team is presently going around the island to look at the state of all government ministries and departments including adherence to Social Distancing and the Occupational Safety and Health of public sector workers.

“All the offices (in the DPP Chambers) are covered in termite,” said the official who spoke on condition that he was not identified.

He said that the group was mandated to undertake the exercise by the Ministry of Labour, headed by Foreign Affairs Minister, Peter David.

According to the official, he understands that the team is preparing a report to send to Minister David calling for the relocation of the Office of the DPP due to a heavy infestation of termites throughout the building.

He quoted a group member as saying that the office, headed by Queen’s Counsel, Christopher Nelson is among the worst government office to be inspected by team members.

“We are very concerned with the DPP Office. It was the worst and most atrocious place we came across. The DPP office should be shut down. It is atrocious. If we had the power to just shut it down the same day, we would shut it down,” he quoted the team member as saying.

The government official stated that the team came to the conclusion that the office of the DPP has an air quality problem and should be rectified as soon as possible by the Keith Mitchell-led government.

He said that he was told that “from the time you enter the DPP’s office it smells moldy, it smells musty and you get that kind of scent”.

He spoke of the presence of termite dropping from the top of the roof and right down the entire length and breadth of the building which is not suited for occupation by human beings.

The official pointed out that water is coming through the window seals and into the office whenever rain falls.

According to the official, it is a sad state of affairs existing within the DPP office as many of the law books are already termite infested.

He expressed fears that Grenada stands to lose a lot of legal books as termites have already started to eat them.

These are books, he said that cannot be easily replaced as “some of these books are out of print”.

“It is horrible,” he quipped.

The official also stated that the DPP office is without a proper kitchenette for staffers.

He said the situation is equally terrible at the nearby Supreme Court Registry.

He said the group is expected to make a recommendation for the Mitchell administration to find an alternative place to store all the important documents now lodged at the registry.

THE NEW TODAY understands that some registry staff members have been relocated to a section of the Modern Photo Studio building about 200 yards away but the vault with important historic documents is still lodged at the registry building.

He said that several staffers of the registry are still forced to go back into the old building on a daily basis to do searches, and to help oversee people doing private searches for most of the law firms on the island.

He said the COVID-19 Health Team is fearful that a lot of the workers would eventually fall sick with respiratory problems due to the bad condition existing at the Registry.

“All the documentation that is there, needs to be removed and stored in a proper condition… an air-conditioned place that they (the workers) can breathe properly,” the official quoted the team member as saying.

He said the group plans to recommend to the Mitchell regime that the Registry building should undergo immediate renovation and restoration work to put it back into suitable accommodation for the possible return of the workers.

In addition, he said that consideration might have to be given as to whether the building is big enough to house the staff of the Supreme Court Registry given the already large number of staff.