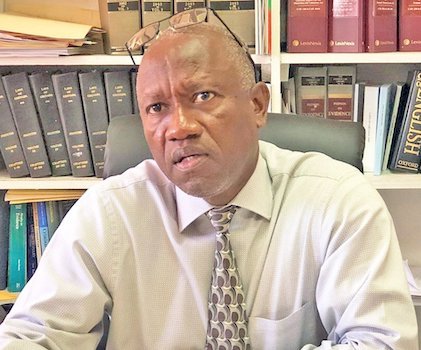 Those were the words used by Director of Public Prosecution (DPP) Christopher Nelson, QC, to describe the severe criticisms levelled by some members of the Grenada Bar Association (GBA) to the proposed amendments to the Criminal Code.

The document was recently circulated to members of the Bar and other stakeholders for consultation by the Office of the Attorney General, which is headed by Guyanese-born attorney, Darshan Ramdhani.

Six of the island’s leading criminal defense attorneys called a press conference to object to some of the proposals, which if approved by Parliament will see the penalty upon summary conviction of indecent assault increased from five (5) to seven (7) years and the penalty for rape increased from 30 years to life imprisonment.

Other amendments advanced by the AG’s office include the removal of certain restrictions pertaining to the admission of evidence, expanding the classes of persons permitted to have access to or remain in the room or building in which matters are being heard in sexual cases.

Long-standing Barrister-at-Law, Anselm Clouden is of the opinion that the proposed amendments will in some cases deny the civil rights of persons that have been protected by the Criminal Code.

Clouden referred to the move to amend as “tyrannical”, “alarming” and “unconstitutional” and accused AG Ramdhani of seeking to violate what he called “the protective mechanisms” in the constitution that ensures there is always due process in a court of law.

DPP Nelson who also played an essential role in the development of some of the proposals being advanced for consideration said the responses of the lawyers to the proposed changes are “unfounded,” and driven by emotions and nothing else.

“I have not heard any sound legal opposition expressed by any of the lawyers. The criticisms I have heard are very superficial and in most cases baseless,” he told THE NEW TODAY.

“They (the criticisms) are unfounded in my view and basically an emotional response to the attempted introduction of measures that have merit and which can benefit the administration of criminal justice”, he said.

According to DPP Nelson, these measures which are now the subject for consultation have already been adopted by other Commonwealth countries “without any hue and cry about the (violation of) rights – be it constitutional or otherwise of accused persons”.

“The recommendations are sound recommendations, some of which are already in force in some Commonwealth countries. It will aid the administration of justice if they are adopted, bearing in mind that justice is not just for the accused but is also for the victim of crimes and the general society at large.

“So, what I’ve heard really is a lot of hot air being blown and no serious criticism or suggestion to the recommendations.

DPP Nelson pointed out that this is just a draft bill that was sent to the Bar for circulation among members and to seek their comment as part of the process of consultation.

He said: “If the Bar think a more face-to-face consultation or some further engagement is necessary then so be it but my understanding is that it was circulated to them for comment and one would expect constructive comments from the Bar or members of the Bar.”

American-trained attorney, Jerry Edwin, who has described the proposed amendments as “caveman legislation” that cuts across the constitutionally guaranteed rights of persons who should always be viewed as innocent until proven guilty by a court of law, disagrees with the DPP’s arguments, stating that “comparative legislation is not a mark of what national constituencies want.

“…Clearly, in these other jurisdictions nobody said that they were going to pull the pants down of a male defendant and for a low-level crime such as praedial larceny, we are going to beat them like a slave – only Grenada enforces that because that is what the national constituency wants or at least that’s what the Attorney General at the time wanted”, he said.

“So you could say that they do this in Guyana, therefore, we should do this in Grenada and it sounds good but that is not the way how laws are drafted,” he added.

Edwin accused the state legal machinery of engaging “in the game of persuasion to tell the Grenadian public that “yes” we are doing something that the rest of the world is doing”.

He said then if that is the case Grenada should “stop flogging people like slaves because nobody else does it except for Saudia Arabia and Singapore and some countries that I don’t think we want to have a legislative scheme in common with”.

Like DPP Nelson, AG Darshan Ramdhani has also dismissed the claim by the lawyers that the proposals are unconstitutional.

He told THE NEW TODAY: “I would like to hear someone tell me where it is. We are not removing the rights of any individual. Everyone is still innocent until proven guilty – they will have a right to confront the accused in court and they would have the right to cross examine”.

Ramdhani has come in for a barrage of criticisms from his legal colleagues over a particular amendment to the Evidence Act which seeks to remove corroboration that seems to contradict what is outlined in section (8) (e) of the Grenada Constitution.

Based on the proposed amendment in its drafted form under the Evidence Act, it says that corroboration is not necessary for evidence given by a child of tender years in civil or criminal proceedings to determine liability or conviction.

Attorney Edwin has sided with his colleague Attorney, Derrick Sylvester, who lashed out at the AG, chiding him for demonstrating what he called “a lack of respect” to the Bar by asking for feedback at the last moment when he had already drafted the bill for submission to Legislators to pass through both the Lower and Upper Houses of Parliament.

“He (Ramdhani) is seeking to abrogate the law,” Sylvester told reporters during a press conference in St. George’s, as he referred to the attempt by the island’s AG to prevent certain so-called specialists to submit reports to court and not to be subjected to questioning by defense attorneys.

However, DPP Nelson, QC, hit back saying that “the removal of corroboration does not leave an accused man unprotected.

“In fact, in the United Kingdom and other Commonwealth countries, that approach has been accepted (and) we are way behind,” the DPP declared.

In response to DPP Nelson, Attorney Edwin said: “There is an eerie similarity between the process followed here and the one that was followed in the proposed constitutional reform to go to the Caribbean Court of Justice (CCJ) in that the Ministry of Legal Affairs has already drafted the law…so it’s confusing that the Minister of Legal of Affairs is saying that this (the proposed amendments) is what we are going to impose on the public and the Attorney General saying that they want to have consultation. So, which one is it?”

Attempts by this newspaper to contact Bar Association President, Attorney-at-Law Lisa Taylor for comment on the issues have proven futile.