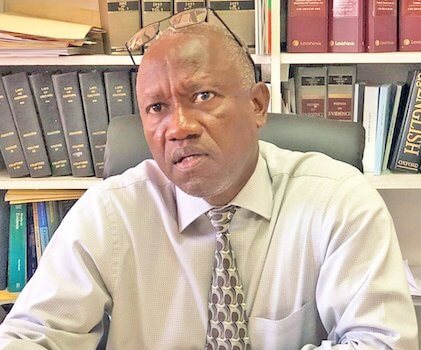 Director of Public Prosecutions (DPP), Christopher Nelson has advised local police to go ahead and file criminal charges against two people who left a COVID-19 quarantine facility without health clearance.

The two men left the small hotel in the south of the island where they had been quarantined for four days after arriving from Canada, without waiting for the results of the standard PCR test which is to be administered to everyone arriving outside the Caricom Bubble.

Days later, it was discovered that at least one of them tested positive for COVID19 and had been out and about in various communities in the North East of Grenada.

DPP Nelson confirmed on Friday that the matter was brought to him for legal advice and he has instructed the police that the two should be charged for “failure to remain at the designated quarantine location”.

Nelson said, “the regulation sets up a regime to be followed and this was not followed.”

The formal process of charging the two men, said to be cousins, is expected to happen once they are out of isolation.

There is no jail time, however the Magistrate does have default powers that allows for a period of confinement for failure to pay a fine.

On Thursday, attorney-at-law for Patient-25, Jerry Edwin said the defence was prepared to deal with any charges filed by the State as a result of his client’s unauthorised departure from quarantine.

Edwin admitted that his client did leave without clearance because he believed he was not infected since he tested negative in Canada.

As a result of the actions of the two persons who fled quarantine, multiple households have been placed in isolation, one business has shut its production facility indefinitely and a construction project has halted.

A third person who went into the facility to visit someone in quarantine may be charged for offences unrelated to COVID-19 protocol breaches.

As of now Grenada has no law against illegally entering a quarantine site.

During a search, the man reportedly damaged hotel property and could face charges related to this.

He also suffered a broken leg while trying to escape during a search by security.