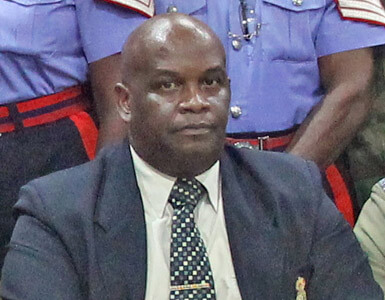 A police insider told THE NEW TODAY that McKenzie was given the nod by the Public Service Commission (PSC) over the other Deputy Commissioner of Police, Tafawa Pierre who is known to be closely aligned to the former New National Party (NNP) regime of former Prime Minister Dr. Keith Mitchell.

McKenzie was not favoured by defeated Prime Minister Dr. Keith Mitchell who took him out of the mainstream of the police force to serve stints at the Richmond Hill prison as Commissioner and then on the St George’s port.

New Prime Minister Dickon Mitchell has come in for some criticisms from supporters of the ruling National Democratic Congress (NDC) for keeping Pierre, the Number Two man in the position in light of the fact that he is the husband of former Education Minister Emmalin Pierre.

According to the police insider, the decision to put McKenzie to act as Commissioner of Police in the absence of Martin who is on assignment in Trinidad & Tobago for a week is a clear sign about the thinking of Prime Minister and Minister of National Security, Dickon Mitchell on the way forward for the local police force.

He said that the overlooking of Pierre and giving the task to the newly appointed McKenzie will get a lot of support from officers within RGPF who want to see Prime Minister Dickon Mitchell effect more significant changes within the leadership of the force.

“It will go down well – the general feeling of a majority of the members is that they don’t want Tafawa Pierre around – they don’t want him around at all and they believe that he is too involved in what’s going on in the force given who he is,” he remarked.

“I think the general feeling is that they accept McKenzie as acting as Commissioner in the absence of Martin,” said the insider who is a senior member of RGPF.

Some top NDC supporters have confided in THE NEW TODAY that there is need for widespread changes in the leadership of the police force given the manner in which it operated under the regime of former Prime Minister Dr. Keith Mitchell.

One influential government insider favours the new Congress government making an approach to the Royal Bahamas Police Force (RBPF) to recruit a new Police Commissioner to help in the rebranding of the image of RGPF.

The defeated Keith Mitchell is known to have kept a special squad of police officers to provide security for him in his tenure in office.

He paid out over $200, 000.00 to these officers who were not allowed to take holiday but to stay on the job and guard him in office.

Under attack for the large pay-out, Dr. Keith Mitchell responded by saying that he could not allow anyone else to guard his life but members of this elite squad.