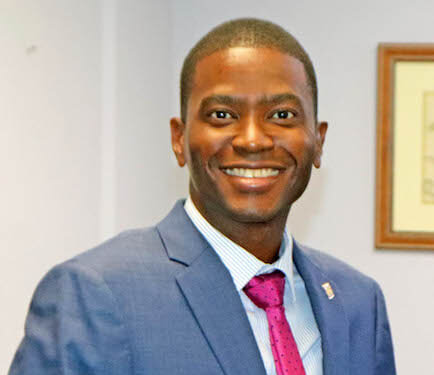 Prime Minister Dickon Mitchell has acknowledged the role played by former Opposition Leader Tobias Clement, the one-time Member of Parliament for the St George North-east in paving the way for the defeat of Prime Minister Dr. Keith Mitchell and his New National Party (NNP) in the June 23 general election.

Speaking to THE NEW TODAY in an exclusive interview, the new Grenadian leader who is the Political Leader of the National Democratic Congress (NDC) credited Clement for playing a significant role in the unfolding of the democratic process that paved the way for the downfall of Dr. Mitchell.

“I want to put it on record that him (Clement) walking away from NNP was a significant shift because it showed that there was someone – even if they were a member of the organisation – they were prepared to say enough is enough and that there are changes that need to be made and be prepared to walk away from it.

I certainly give him (Clement) full credit for that and for being courageous as well because not many persons have the courage to walk in the circumstances in which he did.

Clement who is from the sister isle of Petite Martinique became the lone Opposition Voice in Parliament some two years ago when he crossed the floor following the clean sweep of the polls by NNP and labelled then Prime Minister Dr Mitchell as becoming too dictatorial in his governance of the country.

He cited the decision taken by the defeated Prime Minister to remove the budget set aside for Parliamentarians from under the Houses of Parliament and placing them in the Office of the Prime Minister.

Clement was also engaged in a long running battle with the decision of PM Keith Mitchell to take for his own use the Office of the Opposition in Parliament and relegating him and his Secretary to smaller quarters.

Prime Minister Dickon Mitchell disclosed that despite the problem he encountered with the former Opposition Leader on their talks to get him involved in the just-ended election, he said that Clement called him and “offered congratulations” to him on leading congress to a 9-6 victory over NNP in the polls.

The new Prime Minister was asked to explain what went wrong in the talks between himself and Clement for an accommodation in the election.

He said: “In my discussions with Mr Clement, I made it clear that he had to become a member of the party. I was not prepared to have an accommodation. I did give him a Memorandum of Understanding as to what my understanding will be. He did ask me to draft (it) and give him an opportunity for an input.

“One of the clear things in that is that there will not be any public announcements unless it was approved by both parties. Regrettably I saw him on TV announcing that he was going to be the candidate.

The reality is that in the construct of our candidate selection process he probably would have to be the exception but for that to happen I would have had to use my own political authority to ask my party to make him the exception.

According to Prime Minister Dickon Mitchell during their “open discussion” at no time Clement told him that he was not prepared to become a member of the Congress party.

“If he had said that then the discussions would have been over for the same reason that we had to be a united front,” he added.

PM Dickon Mitchell said he felt that Clement had left the question open on joining Congress and as such he was prepared to continue the dialogue with the then Opposition Leader in Parliament.

“…If he had decided to become a member of the party we would have had to go through certain basic requirements,” he remarked.

The new Grenada Prime Minister stated that he would have wanted the NDC party branch in the St George North-east constituency to have an opportunity to know what was happening and also to take their views on board.

In addition, he had to approach the National Executive of NDC, which is the second highest decision-making body in the party after the annual Convention of Delegates to sanction the Tobias Clement issue.

According to PM Dickon Mitchell, he was confident that he could have gotten approval from the National Executive to sanction it but the real power lies in the constituency branch.

“I would have wanted the opportunity for them to say hey or nay. By going and saying you will be the candidate gave the impression that there was some kind of an agreement that I had agreed that you will be the candidate and by-passing the organs of the party. In those circumstances I didn’t have to think about it – it meant the discussions were over and so essentially that is what happened,” he said.

The NDC gave the nod to Assistant General Secretary of Congress, Ron Redhead to run on its ticket in the constituency and he defeated NNP’s Nimrod Ollivierre by over 1000 voters in the contest on Election Day.