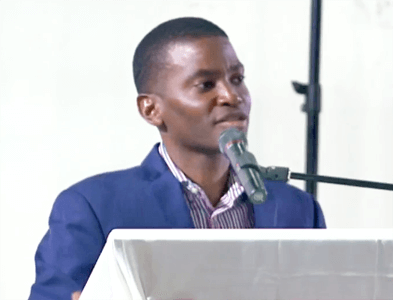 Attorney-at-law Dickon Mitchell has disclosed that if elected as Prime Minister following the June 23 general election, he will pass legislation in Parliament making it mandatory for elected members belonging to his National Democratic Congress (NDC) to report back to their constituents every three months.

Addressing a large gathering of Congress supporters at a campaign rally in the Tempe playing field on Sunday, Dickon Mitchell said that it will not be business as usual under his leadership and that his Members of Parliament will be made to hold themselves accountable to their constituents.

‘We will pass legislation to make it mandatory that all Members of Parliament come back to the constituency at least once a quarter and account to the people for their stewardship and take questions from the people and answer to the people what have you done to represent us for the last 90 days,” he said.

According to Dickon Mitchell who is seeking to replace Dr. Keith Mitchell as the new Prime Minister of the country, he expected this process to start no later than September 24.

“This is serious business,” he said.

Amidst loud applause from Congress supporters, he said that all elected NDC members in Parliament would be called upon by law to report “back to you what we have done for the first 90 days of our government and so I make that pledge to you the citizens of Grenada.”

Dickon Mitchell stated that the days of MP’s visiting and reporting to constituents just before the holding of another general election will be over and done with under his watch as Prime Minister.

A confident-looking Congress leader also told the massive crowd that “The House” which is the symbol of the ruling New National Party (NNP) is starting to crumble during the ongoing election campaign.

Dickon Mitchell said that Congress is prepared to accept supporters of the NNP as all Grenadians are needed to come on board to help with the development of the country after the election is over.

He also sent out a message to workers that Congress will protect them against any form of victimisation from the current rulers.

Dickon Mitchell told the NDC supporters that all Grenadian workers whether they are Imanis, contract workers, private sector employees or public officers to not be afraid of any government when it comes to intimidation in 2022.

‘No Prime Minister will be allowed to intimidate you in 2022 – Grenada belongs to all of us and therefore on June 23, take back your country, live in a free Grenada, live in a Grenada where you are free to speak, free to worship, free to argue, free to discuss, free Grenada on June 23, 2022.”

The NDC leader spoke of being confident that the island will see regime change in the election due in less than three weeks and pointed in the direction of “a wind of change” that is currently blowing and which result in a kind of a tsunami to sweep out PM Mitchell and NNP from office.

Dickon Mitchell is seeking to create history by becoming the first person to enter frontline politics and within a year elected as Prime Minister of Grenada.