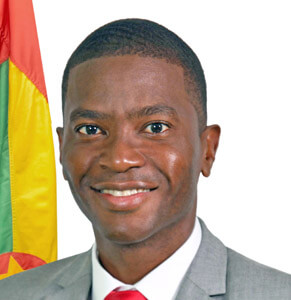 Prime Minister Dickon Mitchell - spoke out about payments made to FAITH

Prime Minister Dickon Mitchell has told Grenadians that he is ready for any court battle that the controversial FAITH group, linked to former Education Minister Emmalin Pierre is contemplating to bring against his 4-month old administration.

“I am a lawyer – we can get to court when the time comes and who have to sue can sue,” said PM Dickon Mitchell at a Town Hall meeting in which he disclosed that the so-called Not For Profit organisation had benefitted to the tune of millions of dollars from the defeated Keith Mitchell-led New National Party (NNP) government.

According to PM Mitchell, this outfit should really be involved in philanthropic, charitable, and religious work in terms of helping people and not to make a profit.

He said the original name of the group in which a sister of Emmalin Pierre is listed as a Director was the St Andrew South-east Development Organisation, Inc.

This name, he told the audience, hinted that the group was formed to help develop the constituency of St Andrew South-east held by the former Education Minister who has been the elected Member of Parliament for the constituency since the 2013 general election.

Prime Minister Dickon Mitchell pointed out that in a 2-year period between 2020 and July 2022, this company was paid $6.8 million by the Government of Grenada.

The Prime Minister stated that in only 2 years of operation FAITH had racked up $3 million in revenue.

In addition, he said that the Cabinet of Ministers in the NNP regime had passed a resolution handing over to FAITH three (3) community centres in St Andrew’s South-east that should really be used by the people in the area.

Prime Minister Dickon Mitchell identified the services provided by FAITH as only Sanitisation by spraying children’s hands when they come to school during the Covid-19 period.

PM Dickon Mitchell recalled that the then Keith Mitchell-led administration had dropped all Covid’19 protocols in February and “no mask wearing, no Social Distancing, no Sanitisation” became the order of the day on the island.

“…There was no insistence of anybody spraying anything. So explain to me between February and July … what service could you possibly be providing when it came to sanitisation and so on,” he said.

The Faith Organization for People’s Development also issued a statement in which it indicated its intention to take legal action against the National Democratic Congress (NDC) Government of PM Dickon Mitchell.

It reads: The Faith Organisation for People’s Development Incorporated (FOPD) has noted, with concern, a number of public pronouncements made on behalf of the Government of Grenada in relation to a contractual arrangement which existed between the FOPD and the Crown. In response to these pronouncements, the FOPD wishes to make the following factual averments.

First, the FOPD is a charitable organisation, and is not run for the purpose of turning a profit. The FOPD’s mandate is one of service to the people of the State of Grenada, and it is in this capacity and against this backdrop, that the FOPD and the Government entered into their arrangement.

Pursuant to these contracts, the FOPD acted, in the capacity of a contractor, to provide the Government of Grenada with the services of hundreds of cleaners, sanitizers, cooks, groundsmen, watchmen, and other workers, who took up the important task of ensuring that this nation’s schools were fit to function in the wake of the Covid-19 pandemic.

The FOPD faithfully and dutifully discharged all of its obligations under the aforementioned contracts, until the second of the said contracts was unceremoniously terminated by the Government of Grenada in September of 2022.

Third, none of the workers who were engaged by the FOPD are permanently employed by the FOPD or have any significant affiliation with the FOPD. The FOPD merely served as an intermediary, to source independent workers at short notice, who were then put to work to fill the urgent vacancies in Grenada’s schools as identified by the Government of Grenada.

Monies paid to the FOPD in exchange for its services as a contractor were never held by the FOPD, other than nominal fees for the administrative and managerial functions which the FOPD needed to carry out in order to ensure the smooth administration of the contract, the payment of the workers, and other similar matters.

Regrettably, despite this foreknowledge, and the FOPD’s provision of workers as contracted, the FOPD received no monies from the Government of Grenada for the services rendered by the said workers, in the months of July, 2022 and August, 2022.

The FOPD’s requests for payment have all been ignored, resulting in hundreds of hardworking Grenadians, many of whom are parents themselves, going unpaid for their service to the Government and people of Grenada.

These requests have been entirely ignored, and resultantly the FOPD has now placed the matter in the hands of its Attorneys, who will engage the arbitration process on the FOPD’s behalf.

The FOPD has no horse in this race, so to speak. The FOPD merely seeks to ensure that those earnest Grenadians who provided services to this country and its children in the aftermath of the pandemic, are adequately and properly compensated for the work which they performed, pursuant to the written contracts executed between the FOPD and the Government of Grenada.

The FOPD implores the Government of Grenada, to live up to its contractual obligations for the benefit of those faithful sons and daughters of the soil, who gave of their time and the sweat of their brows, to ensure that Grenada’s educational system did not collapse under the weight of the myriad, overwhelming, post-pandemic vacancies.

Notwithstanding that the FOPD has placed this matter in the hands of its attorneys, the FOPD nevertheless welcomes correspondence and communication from the Government of Grenada with a view to a timely and amicable resolution.