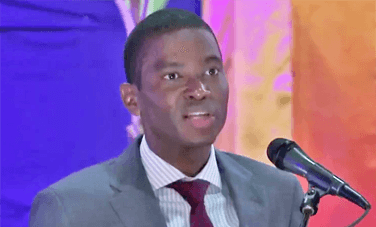 Newly elected Political Leader of the main opposition National Democratic Congress (NDC), Dickon Mitchell has denounced the approach of the ruling New National Party (NNP) government of Prime Minister Dr. Keith Mitchell to the imposition of its COVID-19 vaccine mandate, which has been an issue of contention that has left several workers on the breadline.

Responding to questions posed during the NDCs post-convention press conference in St. George’s on Wednesday, the 44-year-old Congress leader expressed the view that because vaccination is a “complex and serious” issue, it should be addressed in a “sensitive and clear manner” to ensure that people “understand the complex realities of the world that we are living in.”

He said “the policies that a government should enact on vaccination should be driven by having consulted extensively with your population so that you are clear that you are acting in the best interest of the population, and the preservation of the state.”

The Congress leader’s discourse on the issue came 1-day after Prime Minister Mitchell called for him to make public his position on the controversial vaccination issue, during a special sitting of parliament on Tuesday.

The new NDC leader has been under fire himself as the attorney for the American-run St. George’s University (SGU) which has taken the position of mandatory vaccination for its faculty, students and employees.

An attorney-at-law by profession, Mitchell who was elected as the Political Leader of the NDC during the party’s virtual convention on Sunday, has been the subject of heavy scrutiny from some members of Civil Society who disapprove of his legal firm representing SGU against unvaccinated workers who are currently on the breadline because they refused the COVID-19 vaccine.

“We need to address the issue of vaccination in a “frank and honest manner so that people know what the challenges are so that even if the decision is unpopular, they understand why it has to be made but if we do not do that then we have the situation where today for tomorrow you are told that you have to be vaccinated or it’s a criminal offence and it appears as if something is being shoved down your throat without the opportunity to have been consulted with to be educated upon the issue or to dialogue with,” the Congress leader told reporters.

Mitchell defended his profession and placed the blame solely at the feet of the NNP regime for not first consulting with citizens on this important issue.

“If you are going to represent the people of Grenada, you need to first show that you understand the complexities of the issues they are addressing, the nuances of it, the difficulties of it, and you need to consult with them, and if you are to make a decision that is unpopular, or a decision that they may not agree with, you owe it to them to explain and demonstrate why that decision ultimately is in the best interest of the nation,” he said.

The young NDC leader cleared the air on his role in the SGU saga, stating that while he “respects a person’s right to choose whether he or she wishes to be vaccinated” and he does “not believe that someone should take medication against their conscience”, his “responsibility as a lawyer to a client is a completely different skillset” from his “responsibility to the citizens of Grenada as a politician”.

“As a politician, my job is to work for and on the behalf of the citizens of Grenada. I think anyone who understands what one’s obligations are at any given point in time, I think people would recognise that I would have no credibility if I did not represent my clients to the best of my ability. It is that same credibility that I bring to the political stage” he declared.

Related:  Claudette Joseph: “The public service as we inherited it is almost decimated”

The Congress leader said, while “you don’t want someone to be unemployed…the challenge we have is that we face a situation where an ad hoc do as you please approach was permitted to occur, and what that did was put some aspects of the strong against the weak, a self-employed person in a position where the government has said to them, to operate you need to be vaccinated.”

“So, the challenge we face collectively as a society, is how do we embark upon policies because we must be honest with our people…we have to find a policy that is capable of recognising that there are persons who genuinely, based on their conscience do not wish to be vaccinated, and at the same time ensure that they are in a position to earn a living,” he told the local media.

Noting that an “employer also has an obligation to make sure that the environment is safe,” Mitchell explained that if the employer “says I want you to be vaccinated, and you do not wish to be vaccinated, in an environment where there is no law prohibiting it, then the reality is (that) you face the chance of potentially losing your job, and this is not something that should be considered lightly or without empathy.”

The fully vaccinated Mitchell pointed out that the pandemic is driven by both external and internal factors and acknowledged that “the question of whether a Grenadian who is unvaccinated could travel (or) whether persons would come to Grenada…if people are not vaccinated is (also) something we need to address”.

“The reality is Grenada is a small island, a village without the kind of resources that far more advanced and complex societies make, and so, sometimes the decisions which impact us are made externally, and we have no choice and we should therefore not engage in deceiving our people but rather talk, consult, educate and dialogue with them”.

“So, yes I am concerned given the low rate of vaccination throughout Grenada that there may be significant portions of our population who potentially face poverty, the question our government needs to address is how do we deal with that.”

“Do we then say that forevermore, we will help you by giving out handouts, or do we then say, we need to ask ourselves the hard question – is it more or not likely that the requirement for vaccination is not something that is going to go away, that it is something that is likely to continue, and then educate our people recognising their fear, their hesitancy, find it where it’s coming from to encourage them?”

The new Congress Leader emphasised that because the country is small and vulnerable “a lot of what happens is dictated to us because we do not have the power to change it.”

“… If we gonna function in the real world because COVID-19 came from outside, then, we have to also recognise that the help and solutions are likely to come from outside as well, and sometimes we may have to do something collectively after a lot of pondering, and a lot of thought that we may not have initially wanted to do but we have to face the reality that it may take a combination of things – vaccines, proper healthcare, social distancing, empathy, retooling, and re-skilling, so that we could all collectively, come out of this pandemic stronger, united and healthy,” said the younger Mitchell.