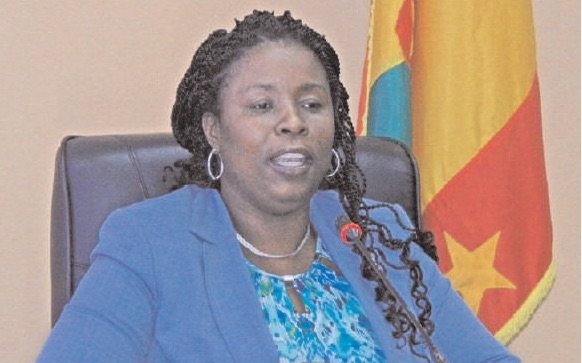 The new Cabinet Minister responsible for hospital and community health services, Delma Thomas, has rolled out an ambitious agenda which she says will usher in a new period of government accountability in healthcare.

Thomas was given a large chunk of healthcare management in a recent Cabinet reshuffle which took effect on October 1.

Minister Thomas appears to have jumped into the new portfolio with both feet, undertaking a highly publicised general clean-up of the island’s main hospital and announcing a number of initiatives for the continued maintenance of hospital wards and beautification of hospital surroundings.

Nickolas Steele, who remains as the senior Minister for Health was not present at the clean-up drive and Thomas also did not mention working along with him when she unveiled a detailed plan to fix the problems in Grenada’s healthcare system.

The public has been deeply critical of Steele’s role as the minister for health over the last few years with mounting concerns about the poor state of the general hospital including problems with medical equipment and staffing problems compounded by the mass migration of Grenadian nurses.

Addressing a post-Cabinet briefing Tuesday Thomas said she will work to change public perception of healthcare – a comment which appeared to be a promise to do a better job with health than has been done so far.

“When it comes to hospital services and community health services let the period of recrimination and pointing of fingers, be over.

“Let a new period of accountability and possibility begin,” she said.

Thomas said the COVID-19 pandemic has brought the realisation that changes must be made in healthcare management.

“Given the experience of the global pandemic this year we all have been forced to rethink our approach to healthy living and by extension healthcare as an aspect of mediation to the broader concept of healthy living.

“To face this unique challenge, our Prime Minister and the team have felt that it is important and crucial to address the issue of the management of the sector so that equal and appropriate focus would be placed on the issue of wellness on the one hand and the issue of care on the other.”

Thomas announced plans to decentralize health services and strengthen healthcare at the primary care level by making more services available in the out districts, while improving the management of the existing system.

However, Thomas is a new face on an old theme of decentralized healthcare and strengthening of district services that always seems to fall short on resources, funding and facilities.

But Tuesday when asked what will be different with this new promise of better healthcare, Thomas said Grenadians will have to “wait and see” and that the 2021 national budget will contain more allocations for the sector.

She said emphasis on wellness at the primary care level and health awareness among the population to prevent the onset of lifestyle illness such as diabetes will be the focus.

She told reporters they will also be working on fixing the staffing problems at the general hospital, improving surgical services and hiring a specialist in order to reduce the waiting time for surgery.

The new hire will be Dr Jose Tristan, a specialist in paediatric and oncology surgery.

The Permanent Secretary said the aim is to reduce the waiting time for cancer related surgeries to one month and other types of surgeries to three months.

Currently the waiting time for any type of surgery at the General Hospital is one year or longer.

She also said laboratory and X-ray services would be introduced at the other two smaller hospitals, Princess Alice in St Andrew and Princess Royal in Carriacou, in the first quarter of next year.