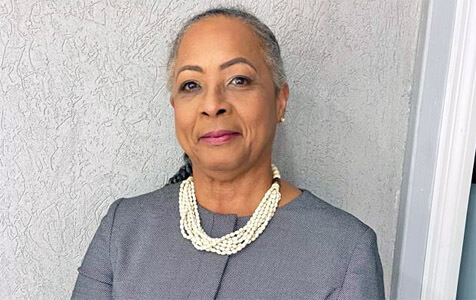 Debra St Bernard – is appointed for another stint at PSC

St Bernard, a former public officer in the Ministry of Finance and also the Ministry of Legal Affairs, took the oath of office Monday afternoon from Governor General Dame Cecile La Grenade.

It is the second stint for the attorney-at-law at the commission after serving in the body during the 2008-13 period in government of the National Democratic Congress (NDC) of then Prime Minister Tillman Thomas.

St Bernard is currently employed with the law firm of Lewis & Renwick in the city and specialises mainly in civil law.

The new body will be considered as more sympathetic to the new Congress administration as Isaac was often seen as an ally of the defeated New National Party (NNP) administration of Dr. Keith Mitchell.

Several public officers had expressed concern over the manner in which Isaac moved within a week from being Cabinet Secretary to the then Ministers of Government, to take charge of the PSC which is recognised by the constitution as the legal body for the hiring and firing of public officers.

The relationship has been rather tense between the new NDC government of Prime Minister Dickon Mitchell and the Isaac-led PSC.

Speculation is rife that the names of a number of persons sent to the PSC for appointment since the change of government on June 23 have met with some degree of resistance especially from Isaac.

Related:  Campbell credits new government on its handling of SEAP

Prime Minister Dickon Mitchell told close aides that he would wait out the term of Isaac before making further approaches to the PSC to make some critical appointments as part of the Transformational Agenda that Congress campaigned on to defeat the NNP regime and to win the June 23 election.

Informed sources told THE NEW TODAY that there were often disagreements between Isaac and other members on a number of issues sent by the previous government for ratification.

According to one insider, Isaac would often be a lone figure at meetings not giving support to issues sent by the government for ratification and would give instructions to enter in the record book that she did not agree with the decisions taken by the majority serving on the body.

The two other government representatives on the PSC not kept by the new Congress administration were Prescott Swan and Greta Franklyn, who have been replaced by Bernard Antoine and Faye Thompson.

Antoine, a former public officer in the 1980’s is qualified in the field of Human Resource and also worked for several years in the private sector including St George’s University (SGU).

Thompson, a former bank employee is known to be closely aligned to Congress and played a role in the campaign for the June general election especially in the South St George Constituency.

The Public Workers Union (PWU) has opted to keep its outgoing representative Judy Benoit on the commission while the Grenada Union of Teachers (GUT) replaced the ailing Delano Viechweg with former school principal, Jim Alexander who was attached to Mc Donald College in St. Patrick.