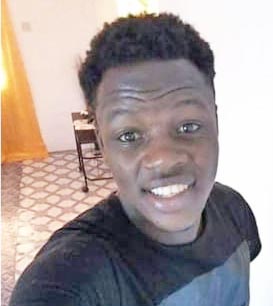 Jamal Charles – controversy rages over the bullet that struck him

Two weeks after the controversial shooting of 24-year old St John footballer, Jamal Charles by a member of the Royal Grenada Police Force (RGPF), the debate still rages on between family member and law enforcement officers on the type of bullet that was used in the gun.

The stand-off was sparked off following claims made by attorney-at-law, Jerry Edwin that the police officer used a “Hollow-Point bullet in his 9mm gun to shoot the youngster widely regarded as “the pride and joy” of the community.

An angry family member who spoke to THE NEW TODAY is giving support to Edwin that the bullet used was of the type that was a “Hollow Point” due to the number of fragments found inside the leg after the shooting.

He said the doctor who looked at Jamal when he was rushed to the St. George’s General Hospital for treatment quickly ordered a second x-ray within minutes of the first as he saw several pieces of bullets in Jamal’s legs.

He expressed doubts that a conventional bullet would have behaved in that manner since only one bullet was fired by the Corporal of Police and that would not have fragmented into so many different pieces in the leg.

“How that happened? What kind of bullet is that?” were the questions posed by Jamal’s close relative.

According to the relative, the distance from which the police officer discharged the gun in the direction of the young footballer should have resulted in the bullet going through the flesh of the leg and not lodged inside of it.

He called for an independent ballistic expert to be brought in to look at the bullet that was used in the shooting.

He questioned whether police officers are not finding these “Hollow Point” bullets in raids on the island and not declaring them and keeping the projectiles for their own personal use in firearms assigned to them by the State.

The family member noted that these type of bullets are banned in most countries across the globe under the Geneva Convention.

A senior police officer who spoke to this newspaper denied that RGPF officers are given “Hollow Point” bullets in the exercise of their duties.

“We don’t have that,” said the officer who did not want to be identified.

He maintained that if the bullet used by a police officer struck a bone in the leg of anyone who is shot there could be splinters of the bullet.

The senior police officer contended that if it was a hollow-point bullet that struck Jamal in the leg, it would have gone straight through “with a lot of flesh and done a lot of damage”.

“That is not a Hollow-Point. If you use a Hollow-Point it will be much more damage than what he has there. The leg will be mashed up and he would have died. It’s a conventional bullet and the bullet may (have been) coated with brass-plate,” he said.

The senior cop questioned the motive of Attorney Edwin for trying “to poison the minds of potential jurors” in his public utterances if the Jamal Charles matter goes to court for trial.

THE NEW TODAY has been informed by police sources that the Corporal of Police involved in the Gouyave shooting was also involved in another police shooting incident in St. Patrick with a man who was wielding a cutlass.