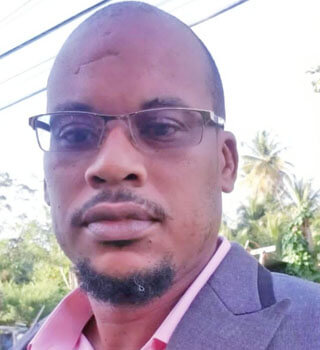 Monday’s handing over of the caretaker role of the South St. George constituency by Member of Parliament Minister Nickolas Steele to Senator Norland Cox has no doubt signalled his intentions to not offer himself up as a candidate of the ruling New National Party (NNP) to contest the upcoming General Elections.

After serving two (2) consecutive terms in office, the controversial businessman/parliamentarian, who is the current Minister for Health now qualifies for a full pension to be paid monthly.

This has given rise to increased debate in the country on the outstanding pension issue, which has been a thorn in the side of public servants for decades.

President of the Grenada Public Workers Union (GPWU) Brian Grimes, chimed in on this development in an exclusive interview with THE NEW TODAY on Wednesday in which he expressed concerns over the perks that are now available to the outgoing parliamentarian.

“The fact that a parliamentarian, who in principle is supposed to be a servant of the people, and one (1) who is elected and selected to empower people, is leaving after less than a decade of giving service, and is going to collect a pension along with having already collected more than one gratuity, while public servants are dying without receiving a pension is not something to be understated,” he said.

“…The Union speaking about this, is not in the context that we don’t want parliamentarians, or anybody for that matter, to not be economically empowered but we are just placing a light on the grave injustice that we face in this country at this point where you have people, who are dying without receiving a pension, while those in power with the capacity and the ability to change the narrative, to change that reality, are instead enjoying the spoils, and others are suffering,” he added.

Grimes went on to say: “…If any citizen looks at this and sees nothing wrong then something is wrong with them.”

Prime Minister Dr. Mitchell, who is seeking a third consecutive term in office at the upcoming poll, was an influential figure in the 1984-90 NNP of Herbert Blaize, which passed a law entitled CAP232, to give parliamentarians the legal capacity, and ability to collect a lump sum gratuity payment for every four (4) years of service, and full pension after 10 years.

THE NEW TODAY understands that gratuity payment to Parliamentarians is not less than $75, 000.00.

Before the March 2018 elections, a Memorandum of Understanding (MOU) was signed between the NNP regime and some trade unions to address the age-old pension issue, with the unions expecting 25% gratuity payments.

However, when the administration returned to power following a clean sweep of all 15 seats at the polls, it reneged on the MOU and reduced the expected 25% gratuity to 2%, a significant decrease in terms of the remuneration that would be given to a retired public officer.

Public servants then took to the streets in protest, but the government responded with the subsequent docking of their December 2018 salaries.

Trade unions have since joined together to take the matter to court, with submissions made to the High Court in October 2021.

The case is primarily centered around Section 92 of the Grenada Constitution, which outlines how the law should be applied concerning pension benefits.

The PWU boss pointed a finger in the direction of Prime Minister Mitchell on the issue of pension and social security for workers.

Grimes said: “The Prime Minister of Grenada, Carriacou and Petite Martinique, Honourable Keith Claudius Mitchell has been recorded, it has been noted that he stated on the political podium in 2018 that a country without good social security, also known as a pension, cannot view itself as a truly developing country, and that his government will fix this.”

“But, here we are in 2022. So, the unions, we await the decision of the court and we are hopeful that justice will prevail and that there will be a relaxation of the oppression regarding pension disqualification in Grenada, Carriacou and Petite Martinique,” he added.

According to Grimes, over the years the trade union movement has “seen a lot of people expire, die just waiting for their pension.”

He referred to “the late sister Angela Peters, who was famous in her fight as an individual to secure her pension,” noting that “her time has passed on this earth, and she has not received a pension.”

“…This is just one example, there are many more examples, and there are examples with people who are living, currently awaiting, and are in an extremely economically disadvantageous position based on that,” he said.

The PWU boss stressed that while he is not opposing any Grenadian to be economically, and financially empowered, there must be “justice, balance, and fairness” in the system.

“The recent happenings in the political sphere bring light to the grave injustice that prevails over our land, and without justice, there will never be true peace, and development in our country,” Grimes said.

This is an obvious reference to the State pension that will be awarded to Minister Steele who only served in government for approximately nine years.