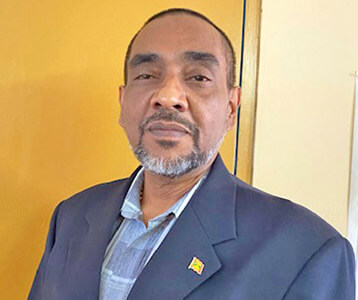 Businessman, and former Private Sector representative in the Upper House of Parliament, Christopher DeAllie, is doubtful that the government’s decision to cap freight prices at 2019 levels for the next six (6) months, starting October 1, will result in inflationary relief for consumers.

De Allie expressed this view on Sunday in an appearance on The Bubb Report with host Dr. Kellon Bubb, taking issue with the decision of the ruling National Democratic Congress (NDC) government, which follows a recommendation by certain elements within the business community, which will be required to pass the highly anticipated savings onto consumers through the reduction in the cost of imported goods.

Contrary to the view held by his colleagues who would have made the request, De Allie is convinced that the freight cap, which will result in a $4 million revenue loss for the government, according to Prime Minister and Finance Minister, Dickon Mitchell, who made the announcement during the post-Cabinet press brief in St. George’s last week Tuesday, will result in increased cost, and not savings for private sector business.

“I don’t think that the cap on freight is going to assist with any sort of relief in terms of inflationary pressures being exhibited now,” stated De Allie, who is the Managing Director of Sissons Paints.

“So, the net effect, is that the companies would have paid more in terms of freight versus the savings…this particular policy construct does not offer any net saving to the business that is incurring the cost,” he added.

He also made the point that “if your net increase in freight is greater than your net savings in the duties, there is nothing to pass on.”

“For us, it is about managing the cost as a business, and how you could best deal with inefficiences within your business, and see how you can get cost savings to minimise the impact on the transfer because if a business doesn‘t get net savings, it can’t pass it on. It’s as simple as that, and that’s what we have to be clear about,” he remarked.

An analysis from the Ministry of Finance indicated that freight charges on average have increased by over 40%, over seven (7) regions with a maximum increase of 108% from Asia, which is the home of China, the manufacturing capital of the world.

Apart from China, Grenada currently imports goods mainly from North America, South America, the CARICOM region, Europe, and Africa and Oceania, which have realised a 40% increase based on demand.

Noting that freight prices worldwide have started to drop, De Allie queried “whether this loss of revenue measure for the government is something that is needed, understanding that the real effect to the average consumer will not be perfectly met.”

Offering a different perspective was Public Policy Consultant, Dr. Stephen Fletcher, who also appeared as a guest on the Bubb Report.

Dr. Fletcher agreed that “if the other cost elements far outweigh the reduction that is going to be incurred by freight then you are not likely to see the kind of impact that you want to see.”

However, he noted that the policy of the Dickon Mitchell-led regime is a move in the right direction, as it is geared to impact on the inflationary pressures facing consumers and that the government, by its actions “has decided that they were going to give up a certain amount of revenue in order to positively impact on prices.”

“Now, I would argue that the impact would not be significant in some respects (but) this measure in particular, is on food items where we are seeing the kind of runaway inflation, especially, on commodities…,” he said.

“…If government taxes, which also contributes to the (cost of) the final product is calculated on the basis of cost, insurance, and freight, and you are able to impact on one (1) of those three (3) areas, you are likely to see a possible decrease in price,” he added.

The United Nations Economic Commission for Latin America and the Caribbean (ECLAC) predicts that consumer prices, which had doubled between the end of 2020 and 2021 to 6.6%, are expected to rise to an astronomical 8.1% in the next 12 months.

Noting that “the fight against inflation takes on multiple forms,” Dr. Fletcher said, the “government will have to look at whatever other policy leverages to see to what degree, and extent it can in fact have the desired public policy effect that you want to have because it is about reducing cost of living to everyone.”

“In the context as a vulnerable small island state that depends on imports, especially, food imports, we have to see to what extent we can pull different levers to effect the reduction in price, and really management of prices…given what is happening in the international arena, the Ukraine war, and the impact on freight charges, the lingering effects of COVID on freight, and things as container prices.”

“Although there is a slight decrease that is beginning to take place regarding freight charges in some areas, it is a good policy lever that has been used and we must see what other levers are in place to effect the change that you want to see which, is the management of inflation.”

The impending cap on freight prices forms part of the new Congress government’s approach to tackling rising cost of living in the country, which is a measure that is scheduled for review at the end of March 2023.

As an added measure, the government is currently engaging stakeholders in consultation towards reducing, or the complete removal of Value Added Tax (VAT) on some key food items, as well as sanitary and hygiene items.