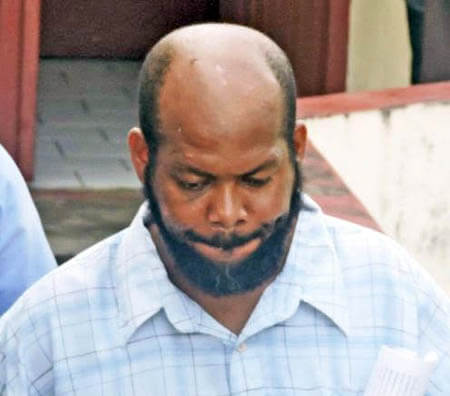 David Gulston – made his first court appearance back in 2018

Also from the village of Beaton, the accused men Gulston and his nephew, Johnny Perryman, a construction worker by profession, who was 26-years old at the time of the fatal stabbing, were initially jointly charged with the indictable offense of Non-Capital Murder in connection with the March 24, 2018 death of Williams.

However, the State Prosecution team decided to reduce Perryman’s charge to Manslaughter and he was granted $30, 000 bail after spending just over 14 months on remand at the Richmond Hill Prison.

Perryman is being assisted by American-trained defense counsel Attorney-at-Law Jerry Edwin and his trial is scheduled to take place sometime in May.

Gulston, who has been on remand since being arrested for the crime, has retained longstanding Barrister-at-Law, Attorney Anselm Clouden to assist him.

On Monday, Justice Charles-Clarke empanelled a 12-member jury to determine the fate of Gulston, who faces a penalty of up to 30 years to life if found guilty of the Offence of Non-Capital Murder.

Leading the case for the State is Senior Crown Counsel in the Office of the Director of Public Prosecution, Crisan Greenidge, who on Tuesday called the first in a list of approximately 7 witnesses to give evidence to support the State’s case of Non-Capital Murder against Gulston.

Information reaching THE NEW TODAY following the fatal stabbing incident was that the deceased collapsed after receiving two (2) stab wounds, one (1) to his face and another to his chest just after 8.00 p.m. on the night of the incident, close to a popular village shop.

Reports at the time suggested that the deceased along with three (3) other men were having a drink at a village shop when another individual, whose name was withheld, showed up.

However, the man’s presence was not welcomed and he was asked to leave the compound but he did not comply, which resulted in an altercation with one of the men who was drinking inside the shop.

The deceased reportedly left the scene and returned moments later with a cutlass and reportedly made a strike with it at the individual.

The cutlass is said to have struck another man who was trying to put peace.

THE NEW TODAY understands that the man who was struck with the cutlass got upset and attacked Williams and the two were soon after engaged in a scuffle.

Sources said that when they separated after a few minutes of fighting, Francis stood up and fell back down.

Gulston reportedly fled the scene following the incident, while the other was said to have been boasting about winning the fight.

Neither accused men have accepted responsibility for the death of Williams and were committed to stand trial at the High Court.