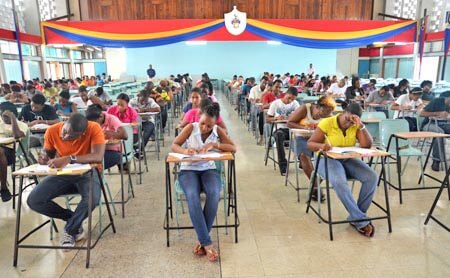 Examination in progress at Mona Campus

There is clear evidence that the University of the West Indies is facing severe financial challenges.

This is one of the highlights in the report about the region’s premier university by the Sir Dennis Byron committee that was mandated to look into the affairs of the premier learning institution in the Caribbean.

The report that was obtained by THE NEW TODAY said “there is significant risk to the future sustainability of The UWI” and “it would appear that the University has had an overextension of commitment beyond its means”.

The committee said in its report: “While the observed deficits are directly related to challenges with the current funding model (how The UWI gets its income), it is also related to the effectiveness of the operations and financial management of the University (how The UWI spends its money)”.

It went on: “These two critical components need to be addressed holistically to ensure that The UWI can survive to deliver on its mandate of providing tertiary education to the people of the region for the foreseeable future”.

As a public service, THE NEW TODAY highlights some of the far-reaching observations made by Sir Dennis and his group:

(c) There is a perceived lack of clarity and transparency on the methodology and data used to calculate the gross economic cost of delivering the various academic programmes. This leads to delays in governments settling the bills for their contributions, again impacting liquidity risk.

This issue was highlighted by Prime Minister Mottley of Barbados during discussion of the UGC Funding Model (2018), and she indicated that the “funding options could not be examined in a wholesome manner without resolving the billing issues.”

Similar concerns regarding calculation of economic cost for funding were expressed by government representatives from ten contributing countries who were interviewed by the Commission.

It was also noted that the perceived lack of clarity and transparency on the billings of the University is not new and has been a persistent concern that has not been addressed.

(3). Consequent on this feedback, what stood out for the Commission was that there needs to be a clear methodology for calculation of gross economic cost and billing, and criteria for disaggregation at a Campus level. This methodology must be understood and agreed by relevant stakeholders.

(d) The decision‐making process for new strategic initiatives needs improvement. There are instances where initiatives are undertaken without sufficient business case diligence and consideration of their financial sustainability and the liabilities that they can create for The UWI.

The UMAD Report to the Commission highlighted the deficiency in the decision-making and approval process as a matter of grave concern.

(e) As The UWI attempts to take on commercial projects to supplement income, there are gaps in the review process, particularly as it relates to conducting the financial analysis, understanding the risks and developing the structure of the arrangements to mitigate risk and ensure financial sustainability. There are also gaps in the process for executing, monitoring and reporting these arrangements.

(g) Non-compliance with the rules governing private consulting arrangements by UWI staff and lack of an effective monitoring mechanism by the University.

Recommendations for Improved Governance – Financial Management
The following are recommended actions/initiatives that would improve governance with respect to the financial management of the University.

(a) The Commission noted that under the University’s Charter and Statutes, responsibility for the financial viability of the institution as a whole rests solely with the Council. The Council must assume ultimate responsibility and ensure that proper oversight of fiduciary responsibility is well executed, and must hold executive management accountable to meet clearly agreed and established financial objectives.

With the recommended new Governance structure outlined in Section 6, the Council, through its various Committees, should review and approve the Strategic Plan, establish frequent reporting and performance assessment to continuously determine the progress of the Executive Leadership in meeting established objectives, and making interventions as needed.

(b) The Council’s fiduciary oversight must be well supported through its committees and executive management with expert advice and data. In this regard, the Council must ensure that it has the appropriate data for decision-making, and should direct any gaps to be addressed promptly.

(b) Resource allocation, cost and revenues need to be made visible and transparent across the defined segments within the University in order to monitor, evaluate and compare the financial performance of each segment (for example, research and innovation or a large project) and its sustainability as a stand-alone at the level of a campus or at the Vice Chancellery or consolidated in a ‘One UWI’ approach.

The Executive Leadership together with the Finance and Capital Allocation Committee of Council will need to agree on the defined segments relevant to the University as well as key performance metrics for endorsement by the Council. Also, Executive Management will need to define all elements that require approval by the Council so as to ensure that systems and resources are in place to generate this type of reporting on a timely basis.

(c) Greater effort must be made to address the financial challenges through implementation of aggressive cost-reduction initiatives. The UWI leadership should proactively initiate extensive cost‐saving and efficiency projects such as the ones recommended in the ATTAIN report.

With the impact of Covid- 19 and the resulting shift to digital education delivery, there should be increased focus on leveraging technology to reduce the economic cost of tertiary education at The UWI. (Section 9 goes into more detail on the recommendations for Digital Transformation). These pro-active efforts are important not only to ensure survival of the institution, but also to instil greater confidence in the key contributors – regional governments, the Private Sector and alumni – that The UWI leadership is executing an effective plan that will put The UWI on a more sustainable path for the future.

(i) Clear definition of authority levels and approval limits

(v) Process for undertaking Strategic initiatives and commercial projects, including a sound framework for:

All these should be reviewed and approved by the relevant committees recommended in Section 6 on Governance structures, namely, the Finance and Capital Allocation and Audit and Risk Committees.

(f) Once the improved governance processes are developed and documented, a robust programme of communication and training is required at the relevant levels to ensure there is full awareness not only of the procedures, but of the expected role that all persons involved must play to ensure compliance.

(g) Calculation of Economic Cost and Billing: – The Commission recommends that a team be established with relevant stakeholders, including all Bursars, and possibly, a mediating consultant, to review and agree on a methodology to calculate the economic cost and to allocate that cost through an agreed billing process.

Given the work done by the ATTAIN group and their familiarity with the University’s structure and nuanced understanding with granularity of details across key dimensions, it is suggested that someone from this team could be asked to play the role of the mediating consultant.

Clarity should bring an explicit labelling of the cost dimensions used in the current 80:20 cost-sharing model, whereby teaching cost (including shared services support and ancillary costs) would be recovered on the basis of the economic cost per student in the particular Faculty on the campus.

(i) For private consulting arrangements, the Commission recommends a process to require the submission of quarterly declarations by staff members to which the consultancy rules apply, on the consultancies undertaken by them during the previous quarter with confirmation that the prescribed percentage of fees received in respect of such consultancies has been paid over to The UWI.

Appropriate sanctions are to be applied if false or incomplete declarations are submitted.

A New Funding Model for UWI
In December 2017, a UGC Task Force was established to review The UWI’s funding model and to make recommendations to create a path towards financial sustainability.

N.B. The committee voted evenly on the recommendation for the Securitisation model and the payment plan model

Recognising the limitations in fiscal space for Governments, the Task Force recommended a new, sustainable funding model as well as mechanisms to address the significant receivables due from Governments.

The funding model recommended by the Task Force was presented to a special UGC meeting in November 2018. After feedback and discussion about technicalities that needed further research and review, the UGC concluded the meeting with the following actions to be undertaken:

(b) The continuance of the structured payment plans; and

(d) The establishment of a University Trust Fund

In reviewing the model, the Commission was mindful of the conflict between the desire of regional governments to meet the need to offer affordable tertiary education to citizens, and their ability to fund this on a long-term, sustainable basis.

The Commission recognises and supports the governments’ commitment to tertiary education as a critical enabler for development. However, the harsh reality is that governments will continue to face fiscal challenges in the near future, with many competing demands for funding from different sectors.

The Commission noted that the UGC did not agree on the proposed cost-sharing model with increased student contributions. The UGC instead agreed on setting up a Trust Fund which the various contributing Governments would be asked to seed.

While the Commission agrees in principle with the establishment of a Trust Fund, this solution could work only if the Fund were to be seeded with either cash or income-generating assets. With the current fiscal realities affecting the Governments’ ability to seed a Fund with these types of assets, the implementation of this concept seems unlikely.

The Commission supports revisiting the cost-sharing funding model based primarily on the reality that governments are unable to meet their current share of the economic cost of education. Given the fiscal challenges faced by regional governments, the key question is: in what ratio should the costs be shared?

The Commission feels that students, being the primary beneficiaries of the tertiary education, should contribute a greater portion of the economic cost. Having said that, the Commission is keenly aware of the financial challenges of many students and parents and, for this reason, thinks it is imperative that support be given in the form of full up-front funding via student loans, with manageable repayment terms.

The Commission recognises that even with greater up-front funding support, there are some hurdles and risks in increasing the student contribution too significantly from the current 20%. There is an expectation by the population based on historical practices to receive ‘free education’.

As such, any alterations of fees could result in a decline in enrolment. When the Barbados Government stopped funding the 20% student portion effective for academic year 2014/15, enrolment dropped by 21% from 7,388 students in 2013/14 to 5,825 students in 2014/15. On the other hand, when in 2017, Trinidad reduced the Government Assistance for Tuition Expenses (GATE) grant funding for new students, on a phased basis with needs-based assistance, this had a lower impact on enrolment.

Importantly, in terms of equity, and before any new funding model is subscribed, the University must demonstrate moral and fiduciary responsibility, and ethical guardianship in its effective and efficient use of institutional resources. Further, it should clearly show how these resources are being maximised to increase the greater good of Caribbean society.

If The UWI is going to move to a model with students contributing a greater share of the economic cost, it is important to do scenario analyses to factor in attrition rates and other critical variables that would affect the outcomes. The revised model has to be carefully crafted with mitigating factors to minimise disruption and the disenfranchisement of needy students.