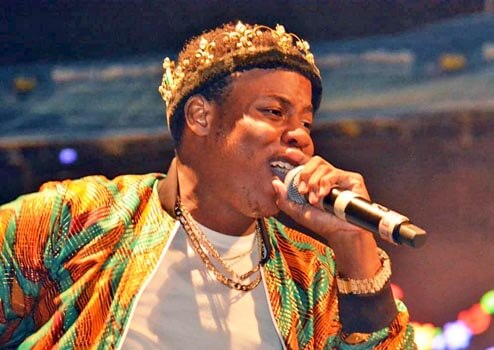 Those were the words of one of Grenada’s 2019 Groovy Monarchs, Jevaughn ‘V’ghn’ John in an interview with THE NEW TODAY, after he performed as a guest at the Groovy Monarch finals at the Grenada National Stadium (GNS) last week Friday, instead of defending the title, which he shared with the undefeated 4-times Groovy Monarch ‘Dash’, who also opted not to defend the crown this year.

‘Dash’, who has made history as the only artist to capture the Groovy Monarch title four (4) consecutive times, denied a request for an interview when contacted by this newspaper via telephone days before the finals were held, amidst what appeared to be a withdrawal from SMC-organised competitions by some of the regular artists over the controversial issue of insufficient prize monies.

However, V’ghn, who has maintained silence with regards to this issue, acceded and used the opportunity to defend his decision to not defend this year.

“I just felt like my time in the competition thing is over, and it’s time for other people to get a chance…I can say this, and I can say this loudly that a crown has never put me out (and) it has never been my main goal or my mission in music,” he said.

“…There is a time and a place for everything, and I just honestly feel like since the last one (competition in 2019), it was my time to exit… because I love to do what my spirit loves, and what makes me feel happy, (and) competition is not one of those things that make me happy,” he added.

After a night of keen competition, it was Cryave, who impressed the judges with his rendition of “Unbothered,” to win the 2022 title and the $30,000.00 first place prize with 273 points.

‘Crayve’ first made it to the final round of the Groovy Monarch competition in 2019 with a song called “Genie lover” when he tied for fourth place with brothers Luni Spark and Electrify (Kellon and Kelson Ogiste) who sang a song entitled “Chocolate.”

“There are phenomenal talents everywhere, especially Mr. Walkie coming second…to come on top of all of these wonderful artists, it’s an amazing feeling, and I just hope that I can live up to the expectations of everyone from here on,” Crayve said in an interview with reporters.

He was interviewed after being crowned by the 2022 Groovy Monarch by the 2nd Runner Up in the 2022 Carnival Queen Show competition Ms. St. David – Tamara Mitchell, on behalf of the 2022 Queen Reesa McIntosh – Ms. St. George, who was unable to make it to the night’s event.

Emmanuel ‘EC’ Charles, who is a first-timer in the Groovy finals, copped the fourth position with a song entitled “Hold on” on 237 points.