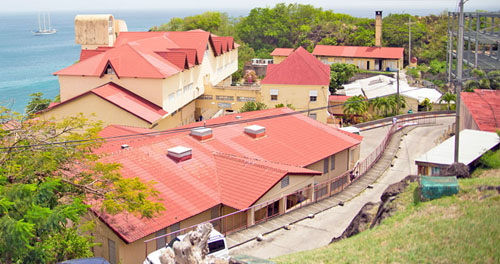 The Grenada health system continues to face a major challenge as Covid-19 is seemingly hitting hard at workers at the St. George’s General Hospital.

A senior nurse at the facility sent out the following message a few minutes ago to THE NEW TODAY: “Many are reporting to work with signs and symptoms.”

The message was sent via WhatsApp to Health Minister Nickolas Steele who read it but did not respond.

This development comes against the backdrop of reports that a key member of the Public Relations section of the Ministry of Health Rapid tested positive Tuesday for the virus at the Ministerial Complex in the Botanical Gardens.

Sources say the individual is now expected to do a PCR test to seek confirmation of his Covid-19 status.

Within the past 30 minutes, an ambulance crew dressed in full Covid-19 PPE outfit rushed to the Ministry of Education building near to the Ministerial Complex to pick up a female employee who reportedly fell ill with symptoms of the virus.

According to a source familiar with the situation at the General Hospital, the nurses are being told by Management to show up for work on the job even if they are Rapid tested positive for the virus and should only go into isolation when a PCR test is done on them and it comes up with a positive result.

He said that some nurses are currently exhibiting symptoms of the virus and have decided not to turn out for work.

The Ministry of Health has not released any statistics on the amount of nurses affected by Covid-19.

However, a few cases are out in the public domain including the female companion of a government employee in a key section of the Ministry of Finance.

In addition, a staffer at the Laboratory at the General Hospital that does the PCR test for Covid-19 was also found last week to be affected by the virus.

An insider at the hospital told THE NEW TODAY that some nurses and doctors are reluctant “to go the extra mile” as the ruling New National Party (NNP) regime has allegedly reneged on a commitment given to make available to them a special payment for their service to the island in the fight against Covid-19.

As Covid-19 continues to take a toll on the health services on the island, some prominent Grenadians have been calling on the Keith Mitchell-led administration to take a more proactive approach in the fight against the deadly virus.

Former Opposition Leader Michael Baptiste called on Prime Minister Mitchell to take charge of the situation as it is reaching the proportions of a national security issue.

A female attorney-at-law warned that Covid-19 numbers “will continue to rise if the authorities don’t lockdown while a former government minister commented, “The place is in a mess.”

Another female professional on the island described the prevailing Covid-19 situation as “extremely serious.”

She said: “…It seems as though the Government has hands in the air as if they have surrendered to the consequences of their mixed messages on carnival and the public’s regrettable response to the mixed messages by playing Jab Jab.”

This is a clear reference to the hundreds of persons who in the face of mixed messages from the Mitchell-led government took to the streets especially in St. Andrew and Sauteurs in St. Patrick on August 9 and 10 to play the traditional Jab Jab mas despite a ban on the annual carnival due to the Covid-19 situation on the island.