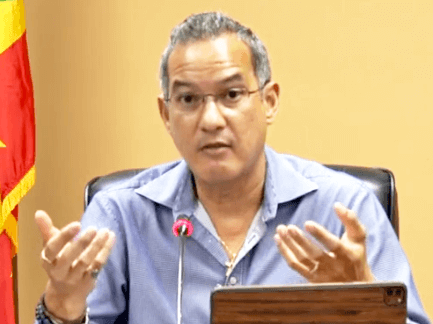 Health Minister Nickolas Steele – there is panic among staffers in health

Covid-19 has hit the heart of the government ministry charged with the responsibility of battling the pandemic on the island.

Well-placed sources told THE NEW TODAY that the Registry section of the Ministry of Health was shut down on Thursday as staffers were sent home as one member returned a positive PCR test for the virus.

There has been no official statement from the Ministry of Health on the issue, as well as reports that one member of the Laboratory staff at the St George’s General Hospital also tested positive for the virus, forcing a number of health workers including doctors to go into isolation.

About six workers in the Registry of the Health ministry were officially notified not to report to work.

Acting Chief Medical Officer (CMO), Dr. Charles who is the Covid-19 czar on the island, reportedly informed the affected workers that the plan is to have them PCR tested on Monday for the virus.

There was an emergency meeting of the Ministry of Health on Thursday morning and staffers were informed that a decision was taken to fumigate the place in light of the positive Covid-19 case there.

“There is panic inside the Ministry of Health,” said an employee at the Ministerial Complex.

THE NEW TODAY was told that a police “No Entry” sign was placed at the entrance to the Office of the Prime Minister, located on the 6th floor of the Ministerial Complex in the Botanical Gardens in Tanteen, St. George.

Speculation is rife that the sign is intended to serve as a barricade to prevent people from entering an area that is frequented by the ageing 75-year old Prime Minister Mitchell.

A government statement said that Prime Minister Mitchell left the island last weekend to do his long overdue annual medical check up.

The virus has started to take a heavy toll on the operations of government services in the past week as several ministries, departments and state-owned bodies have been forced to take action as some staffers tested positive for the deadly virus.

According to a reliable source, the Ministry of Foreign Affairs headed by Senior Government Minister Oliver Joseph was hit as one member of staff reportedly tested positive for Covid-19.

In addition, a key government department in the Ministry of Finance saw two staff members being forced home as they came down with the virus.

The Royal Grenada Police Force (RGPF) also took a hit with about seven officers testing positive for the virus and a number of others awaiting the results of PCR tests conducted on them.

“Once police officers start having Covid-19 then all gone through in Grenada,” said a senior member of the force.

The RGPF High Command was forced to close down the Clerical Department at police headquarters on Fort George as the female civilians who did the work were sent home after one staffer came up positive for the virus.

The state-run Grenada Development Bank (GDB) was forced to close its doors to the public on Thursday and Friday as one member tested positive for the virus.

A GDB release said: “The decision to remain closed is out of an abundance of caution to the possibility that the bank’s operations may have been compromised by a positive Covid-19 case”.

Another financial institution, the Grenada Union of Teachers Credit Union was forced to close this week as a staffer from the St George area also tested positive for the virus.

Grenada has seen its Covid-19 figures jump from under 170 cases to approximately 290 in less than two weeks with most of the parishes affected being St. George, St. John and St. Andrew.

Despite the spike in cases, health officials continue to maintain that the island is not affected by Community Spread of the virus but a “cluster” of cases in some parts of Grenada.

Most of the recent Covid-19 cases on the island involve locals with no travel history in recent weeks.