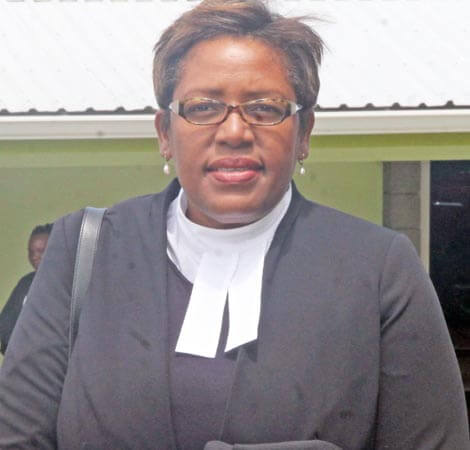 While the new court fees associated with the cost to implement the highly anticipated e-litigation portal is generating widespread debate since coming into effect on March 1, former President of the Grenada Bar Association (GBA), Lisa Taylor has said that the genesis of the problem lies with successive governments which, failed to conduct reviews of the fee structure over the years.

“The genesis of this problem is this – successive governments have not attempted to increase the fees incrementally so, that is why to go from a situation where you were paying EC$1.50 for something and now it has gone to EC$ 20.00, of course, the percentage increase is astronomical but it also speaks to the larger issue that there has been no review of the fee structure for over several years,” Attorney Taylor told THE NEW TODAY in an exclusive interview on Wednesday.

According to Taylor, she has been practicing law for the past 25 years and those fees that were just changed were the same ones in place when she was admitted to the bar.

“…Governments have not been tending to this problem as they should have over a period of time, so, when you get a jump (large increase) like this, it must excite people’s attention, but it obscures the wider issue that these fees should have been reviewed incrementally so that you don’t get much of a shock to the system,” she said.

“If we had been going from one dollar and then to five and then 10 (dollars), it’s easier to accommodate that than to go from one dollar to 20 dollars in some cases where that jump has happened. So, that is part of the discussion that I am not hearing,” she added.

The female barrister expressed the view that the issues now arising in the public domain are also a reflection of the neglect shown to the court system as a whole over the years.

“…It speaks to the lack of attention overall because I think this could have been programmed and managed over a period of time had the government paid attention to the fee structure and the overall legal infrastructure and that’s also part of the discussions that I am not hearing,” she declared.

The fees first came up for consideration before the then Anande Trotman-Joseph led GBA period of 2017-2018 and according to Attorney Taylor, “recommendations were made, some of which required that there be a rethink, because we did think that a great many of them would be uneconomical.”

While attorney Taylor could not speak to the administrative arrangement for the new court fees,” she offered this explanation: “My understanding is that the fees were set by the regional court in consideration of the cost of accessing the e-litigation portal and the fee structure is to be covered by all the members of the court (and) not just Grenada…”

“The fee structure was tailored to be able to accommodate cost associated with the e-litigation portal – among the cost would be software, administration and basically running the system. Grenada would benefit from being able to join on that portal and we are the last country to join because the condition was that we had to agree with the fee structure.

“I don’t know how the money would be allocated but I would have been glad if some of the money could go towards improving the legal infrastructure, which is in great need of an upgrade, including the fact that the Registry building still hasn’t been touched.

“If there was a way some of those fees could go into repairing some of the legal infrastructures, I would be glad for that but my understanding is that they are going to be allocated to paying for the cost of the e-litigation portal.

The former GBA President stated that the concerns which were initially advanced by the Bar to the then Attorney General “were taken on board to the extent that the matter was held back”.

“…We looked at every single one and we made recommendations where we thought some of them were too high. We made certain recommendations about alternative amounts in some cases…the general consensus was that for the most part, we didn’t agree that all of the fees were too high…,” she said.

However, Taylor acknowledged that while for the most part, the fees are high and difficult to pay that another feature of this discussion “is that if we do access the e-litigation portal, one of the benefits is that you can file things without having to physically file paper documents”.

“So, whether that justifies the fees, I cannot say but it certainly is something to be also factored into the discussion,” she said.