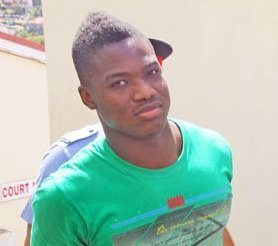 The St. George’s No.1 Magistrate’s Court has taken a decision to take a gradual approach in sentencing Akim Andrew, the 19-year-old who pleaded guilty to charges related to fraud and the illegal practice of medicine approximately three weeks ago.

Acting Chief Magistrate Teddy St. Louis, who presides over the matter at the court on St. John’s Street, decided on this approach at a sitting last week Thursday so as to hand down a sentence that will serve to help redirect the vigour and skills of Andrew in a more meaningful way.

During his first court appearance about a month ago, the accused admitted to fooling over 30 individuals including the mother and sister of a sitting Magistrate.

In mitigating on behalf of Andrew, Attorney-at-Law Jerry Edwin referred to a psychiatric assessment conducted on his client last week by Dr Augustine Panchoo, which labeled Andrew as a narcissist, a person who has an excessive interest in or admiration of himself.

The medical expert concluded that Andrew appeared to be “genuine and truthful” and that the crimes he committed is a “true reflection of the kind of person he is.”

The court learned that the convicted teenager has been committing crimes of a similar nature since he was 15 years old and Attorney Edwin blamed the mother in part for not having the means to support him.

At the age of 17, Akim, who is a former head of the Cadet Corp, and worked as a volunteer at the Gouyave Police Station, impersonated a police officer and was able to operate for weeks in that capacity, without being suspected.

He was able to convince members of the Royal Grenada Police Force (RGPF) and civilians that he was a police officer.

Attorney Edwin believes all is not lost and that there is still hope for Akim, who has been on remand since his arrest last month and was described as the breadwinner in his family and the young father of two infants.

Referencing the life of El-Hajj Malik El-Shabazz better known as Malcom X, who was engaged in several illicit activities but found his true calling while serving a 10-year jail term at a prison in the United States for larceny and stealing, breaking and entering and went on to become an American Muslim Minister and a leading public figure as a civil rights activist, Edwin said: “Even after five (5) acts of wrong doing, I believe he (Akim) still has time.”

Andrew faces a maximum penalty of two years imprisonment as well as a fine of $20,000 for violating the Health Practitioners Act and a maximum 2-year prison term plus a fine for the offence of Fraud by False Pretense.

After considering all elements of the case, Magistrate St. Louis held the view that “sentencing must be taken more seriously” in terms of the impact that sending breadwinners off to jail can have on those who are most dependent on them.

The Acting Chief Magistrate summoned the assistance of officials from the Legal Aid office, Social Services and Psychiatrist Dr. Panchoo, who are expected to come in to assist the court in terms of sentencing, when the matter resumes on February 17.

The Trump card in Venezuela crisis