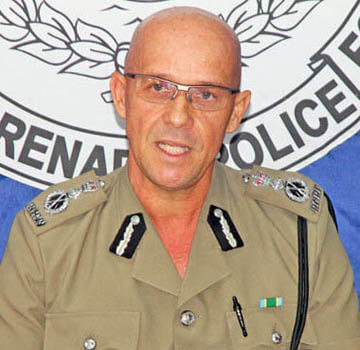 “I don’t know that Mr. Francois’ leave is at a point where there isn’t time for him to take his leave. Let me debunk that all together now. I don’t know if that is the case…,” he told reporters at a press conference on Thursday.

The COP also said: “Where I sit at this point I do not know that the leave that Mr. Francois has cannot still be achieved within the period that he has within the police force.”

Deputy Commissioner Francois is due to celebrate his 60th birthday in June next year and police insiders have said that he should be proceeding on leave right now since he has over 400 days holiday inside which will take him beyond the official time left to serve as a member of the force.

The issue of Francois’ retirement was posed by THE NEW TODAY and Commissioner Martin responded by saying, “It will be unfair for me to ask Mr. Francois to respond to this matter…” and said that he will prefer to address it himself.

“Certainly, if there is an issue for Mr. Francois to serve beyond this time in the police force there would be an open and objective process to treat with that if need be but at this point in time, I don’t know that to be the case,” he said.

“…I don’t know it to be the case that there isn’t sufficient time for Mr. Francois to adequately have his leave before proceeding on retirement,” the COP added, without disclosing the number of days leave the Deputy Commissioner still has inside.

The Police Commissioner used the opportunity to explain that “the issue of persons with leave at the Executive must be understood in the context that there are pressing and concerning issues with the administration of the Force that we have to balance.”

He pointed to a depletion in the High Command rank with the departure of Deputy Commissioner of Police, Frank Redhead on assignment with the Grenada Ports Authority (GPA), whose position was filled in March with the promotion of Superintendent of Police, Tafawa Pierre, the former head of the Financial Intelligence Unit (FIU), along with Assistant Commissioner of Police (ACP) Jessmon Prince, who now heads the Transport Board and ACP John Charles who is currently on leave.

COP Martin who only returned to the Force from leave a few days ago disclosed that he “only came back from leave simply because some of the things that I had to do cannot be done at this point in time”.

“So, the conspiracy, and the negative reports of what is happening with Martin on and off duty, you will know clearly that I am going back on leave in June for another month. And, if it is that I am to leave and at that point in time we did not have Deputy Commissioner (Tafawa) Pierre with us – the only other substantive rank to hold the administration of the Force would have been Deputy Commissioner Francois,” he remarked.

Police Commissioner Martin went on to say: “So, the three (3) ranks at the head table now are the three proper Executive persons – if anyone of us have to leave for a conference, a meeting or some emergency it creates a problem.”

The island’s chief cop was flanked at the press conference by Deputy Commissioners Francois, who opted to not comment on the issue, and Pierre, who was leapfrogged into the Police High Command, over other senior Superintendents like Vannie Curwen, Issa Pierre and Glen Paul.

Martin told reporters: “Our executive, consisting of a Commissioner, two (2) deputies, and three (3) ACPs, are currently down by two (2) ACP’s (and) we now have a Superintendent at Headquarters assisting the Deputy as a staff officer in operations.”

He said that the only functioning ACP at the moment in RGPF is former Commissioner of Prisons John Mitchell, who is also the current Chairman of the Promotions board.

“ACP Mitchell is actually totally involved daily with promotions, and promotion interviews because he chairs the board and has to be there (but) who is doing his administrative work in the background that has to continue is a concern,” he said.

“Mr. (John) Charles is on leave for I think about four (4) months…in the absence of that we have to stagger how persons go and take leave in order for the Executive to continue to operate efficiently and effectively…,” he added.

THE NEW TODAY understands that ACP Charles is also due to retire sometime next year and Superintendent Sylvan Mc Intyre has been sent on pre-retirement leave within the past week and Supt. Earl Dunbar, the former head of the Criminal Investigation Department (CID) has only months to remain on the job.

According to police insiders, a number of vacancies currently exist within the higher echelon of the Police Force without efforts being made by the authorities to fill them.

The source said that in the latter part of this year, and going into early next year, there will be a mass exodus of senior officers from the force, especially at the level of Superintendents who are going on retirement.