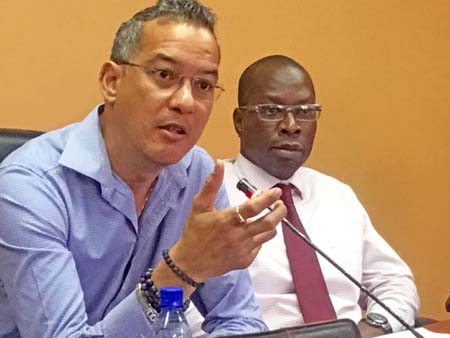 Health officials in Grenada are unable to say conclusively that there is no risk to the country after a direct flight from Beijing, China was given clearance to land at the Maurice Bishop International Airport (MBIA) in the early hours of Tuesday.

Government doctor Sean Douglas on Tuesday said scientists and doctors are yet to determine how transmissible the coronavirus is and at what stage is there danger of person to person transmission.

Health Minister Nicholas Steele confirmed Tuesday that Grenada, acting on advise from the Pan American Health Organisation (PAHO) cleared the arrival of eight Chinese who landed at the airport at 2.00 a.m, outside of normal airport operating hours.

“There was a private flight that was screened here – a flight originating in Beijing with eight people,” said Minister Steele in response to a question from a reporter at the weekly post-Cabinet briefing.

Dr Douglas, who was also present at the news conference said there is a risk but it cannot be quantified because there is so much that is unknown about the virus.

Minister Steele said he went looking for the information about the Chinese flight after the story broke on Social Media Tuesday morning and went on to give the impression that he was aware of its arrival for some time.

“We knew about the flight for two days,” he said to reporters in St George.

According to the senior government minister, the Chinese have come to Grenada on business but the decision by Grenada to allow the flight at MBIA has people on the island questioning the urgency of the business in the midst of an international health crisis.

Minister Steele stated that the Chinese were screened at the airport but gave no information about whether they were held in quarantine for a period to ensure that they are not infected with the virus.

Just one day before the minister had said that Grenada’s risk of developing cases of the coronavirus was greatly reduced because there are no flights flying directly from China.

He later sought to allay fears over the arrival of the Chinese direct from Beijing by saying that it is a private plane and the passengers would not have been exposed as people flying on a commercial aircraft.

The Chinese ambassador to St George was spotted leaving the Grenada government headquarters at the Botanical Gardens just hours after the plane arrived and it was later confirmed that he had been meeting with Prime Minister Dr Keith Mitchell.

The Health Minister has admitted that Grenada is not prepared to deal with an outbreak of the new coronavirus and would have to depend heavily on international health agencies to cope if the virus makes it across its borders.

Earlier this week, Minister Steele disclosed that Grenada has activated its health screening protocols at all ports of entry in order to identify anyone affected by the virus that is now spreading to other nations, after originating in the city of Wuhan in China.

“Grenada does not have a National Guard to go to a stadium and set up an isolation area but organisations such as the Pan American Health Organisation have contingencies for the region,” the minister said on Monday night.

According to Minister Steele, there are contingencies for mass isolation and individual isolation but most of Grenada’s help if the virus hits the island would have to come from outside.

The death toll in China has risen to over 100 more and thousands are now infected by the virus.

At least 44 cases have been confirmed abroad, including in Germany, the United States, and Australia.

There have been no deaths outside China and on Monday the Chinese government confirmed the first death outside of Wuhan, a 53 year old man.

Wuhan remains on lockdown and China has imposed travel restrictions on other areas of the country.

Minister Steele said that in Grenada itself, surveillance has been “stepped up to the required level”.

“What we have to be cautious about, we have no evidence of corona (in Grenada), what would put us at risk is our nationals returning home, visitors (to) our shores,” he added.

There are no direct flights into Grenada from China and the health minister is hoping that this will protect Grenada for as long as possible since international arrivals at MBIA would have to undergo at least two levels of screening for the virus.

Coronavirus symptoms include runny nose, cough, sore throat, headache and fever, which can last for a few days.

For those with a weakened immune system, the elderly and the very young, there is a chance the virus could cause a lower, and much more serious, respiratory tract illness like a pneumonia or bronchitis.

Severe acute respiratory syndrome, SARS, is the other coronavirus that can cause more severe symptoms.

The virus is now airborne, and people are being advised that regular hand washing is an important preventative measure.

One can also become infected from person to person contact. If an infected person coughs or sneezes on someone they can contract the illness.