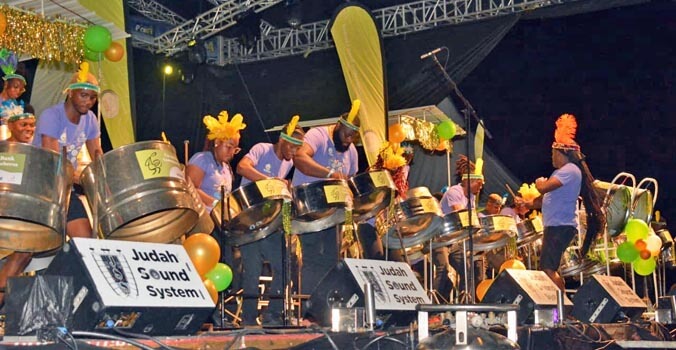 Greenidge, who first started assisting with the band’s arrangement back in 2006 alongside Cecil Noel, said this win augurs well for the newly formed relationship between the band and the home-grown Co-op Bank.

“This victory means a solid relationship with Co-op Bank starting on the right note, being the best bank in Grenada and the best band in Grenada, solidifying this synergy. It’s only beautiful things we can do after that, making magic culturally so that it is what this victory means this year,” Greenidge told reporters.

However, the Drillmaster for the Angel Harps Steel Orchestra, and senior band and arranger for the junior band, Jevon Andrew expressed dissatisfaction with the results, claiming that Angel Harps was clearly the better band this year.

“I am very disappointed with the results. I believe the judges did not do a very good job at all, but the decision is final and we respect it,” Andrew said.

The band’s first Panorama championship was in 1970 with arranger Mitchie Bain. Clarkson has led the band to 15 titles since 1973.

Commenting on the band’s performance, Byam said, “This year was hectic because of the Covid situation. Everything slowed down when it came to music, so teaching was a bit harder. No one was coming to practice, so it was very strenuous, but we still worked very hard to prepare for the Panorama. Looking at our performance, it was great. I don’t think we need to work on anything per se, but I will await what the judges have to say and try to work on it.”

This year’s event saw participation from six (6) steelbands including Pan Wizards which finished in fourth position (238 points), Rainbow City All Stars in fifth position on 236 points, and Florida All Stars in sixth position with a score of 222 points.

After two (2) years of no competition due to the coronavirus pandemic, the Panorama competition returned as “Pantastic Saturday Ultra” this year, and included a show after the competition, featuring the ‘WCK’ Bouyon Band from Dominica, and performances from a cast of top local and international entertainers.