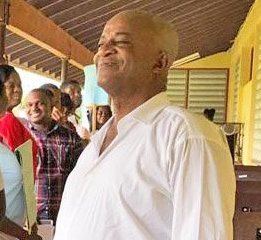 “We haven’t rested. We continue to try to look at solutions to solve the problem. That is all I can say to you at this time.”

Those were the words of Chairman of the College Council at the state-owned T.A. Marryshow Community College (TAMCC), Augustine Vesprey in an exclusive interview with THE NEW TODAY last week Thursday on the issue involving more than $6.1 million in outstanding increments, which has led to TAMCC workers downing tools in protest action approximately two weeks ago.

The workers, led by their bargaining agent, the Public Workers Union (PWU) have taken a decision to engage in protest action for about one hour each working day, until the accumulated sum is paid to them for the period 2014-2018.

PWU President, Rachel Roberts is demanding that the government pay the outstanding sum of money, indicating that the industrial action will continue unless a favourable response is received.

A cautious Roberts did not disclose the strategy that will unfold in the coming days if their request is ignored.

The Keith Mitchell-led administration has since withdrawn itself from the development, with Tertiary Education Minister Pamela Moses dismissing Roberts’ statement that government should pay the increments to the workers.

Speaking at last week’s post-Cabinet press briefing, Minister Moses said that the government is only responsible for paying increments to those employed by the Public Service Commission PSC) and not those workers who are directly employed by the College Council.

She said: “What we have heard from the employer, government and TAMCC, is that they cannot pay (and) they could only afford to pay for one year but you cannot owe somebody their money and you decide that you can’t pay and so you will not pay.

“If you owe someone in our community and in our villages what you do is sit down and say let’s make an agreement…but what we are hearing from government and TAMCC is that we could only pay you for one year – take it,” she added.

According to Hazzard in some instances “some of the workers have been denied salary increases since 2013.

“When a minister of government can tell you that TAMCC is a statutory organisation but the government does not have a responsibility to workers and their salaries that minister and the government (are) saying, I am washing my hands off this issue while I know that it is under my jurisdiction and that is wrong.

“It is wrong of the government to attempt to wash their hands off the matter or to play hands off game and say it is not our responsibility.

“It is government’s responsibility (because) TAMCC falls directly under the Ministry of Education, the Minister of Education appoints the TAMCC Council.

Hazzard pointed to the TAMCC Act which states that “the Minister of Education shall appoint the Chairman of the Council, the Deputy Chairman and two other persons – that’s four persons and the Chief Education Officer also sits on that Council. So, that’s five persons managing, directing and governing the affairs of TAMCC for the government of Grenada”.

“So, I would like the minister to explain to the public how did she get those facts that says she and her government (are) not responsible,” she remarked.

According to the female PWU PRO, the “workers have been quiet for six long years (and) are “willing to go down fighting. They are not going to give up until their just needs are met.”

Last week, the Tertiary Education Minister requested that the College Council submit a plan detailing exactly how it intends to pay the $6.1 million owed to the workers.

Vesprey confirmed that this request is one that will be discussed when the Council meets on the next occasion.

The TAMCC Council Chairman who took up the post in August remained tightlipped as it relates to the reasons why the workers have not been paid their increments over the years.

He said: “I am new to this. I have been given some information but I have not backed it up by all of the facts. So, I wouldn’t want to share it with you at this point in time.”

“So, the Council sets the policy and guides the management but in terms of the day-to-day functioning that is really in the hands of the Principal and his team,” he added.

A finance committee has also been appointed to oversee the management of college funds, and is expected to give quarterly reports to the Council.

According to Vesprey, while the College Council is in receipt of some financial reports they have not been coming to them in a timely manner.

“I am told that they usually meet once a month and make information that they have, available to the members…there are financial reports, they do quarterly reports but quarterly reports don’t actually end when the quarter end (because) there is a time delay. So, the (last) quarterly report was given very recently amidst this whole industrial activity,” he said.