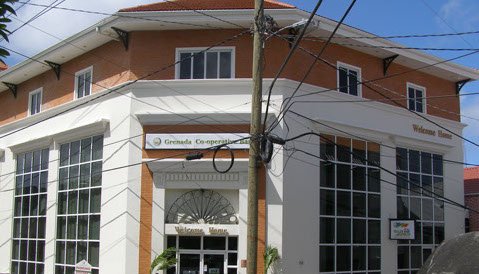 Grenada’s lone indigenous bank has again maintained its position as the leading financial institution in the commercial banking sector despite the impact of the COVID-19 pandemic which has affected consumer confidence.

The Grenada Co-operative Bank Limited presented its end of year performance report to the media Thursday, announcing $9.6m in after-tax profits and the largest number of customers among all the commercial banks on the island.

Chairman of the Board of Directors, Daryl Braithwaite said after-tax profits fell by 0.4%, the first drop in six years.

“This year marks a flattening of the bank’s after-tax profit following six consecutive years of steady growth,” he told reporters.

“Such performance must be viewed in the context of a weakened economy, a ferociously competitive market and astute management and leadership of the Bank,” he said.

Chairman Braithwaite reported that liquidity is high in the sector as deposit growth flourishes because of repressed consumer confidence and growing uncertainty.

He explained that there are “limited options” in the domestic market for absorption of the excess liquidity as demand for credit has weakened and remains depressed.

The Bank also recorded an expansion in loan portfolio and a reduction in the amount of non-performing loans to below 1%, Braithwaite said.

The closest competitor holds 21% of the banking consumers.

In terms of customer satisfaction and customer loyalty, Duncan said, “It remains a tight race” with RBTT and First International Caribbean Bank as close competitors.

Chairman Braithwaite believes that one of the reasons for the level of customer loyalty enjoyed by Co-op Bank is the fact that it is the only Grenadian-owned bank in the country.

Despite the disruptions to financial and economic activity brought on by the coronavirus pandemic, the Bank was also able to report an expansion of its net assets position by 11%.

According to the year-end performance report, the net assets of the Bank now stand at $123.3m.

Executive Director Alana Joseph credited this to a commitment by the Board, management and staff to the Bank’s strategy and the loyalty of customers.

However, she anticipates an increase in the negative economic impact of the pandemic in 2021 with slow economic recovery and fast adaptation of technology.

She said given this projection the bank would maximise any opportunity to grow select areas of business.

Co-op Bank is already seeking to further develop its brokerage service and Chairman Braithwaite said the aim is to give consumers another way to reasonably, safely invest their money as interest rates continue to fall as international market forces are brought to bear.