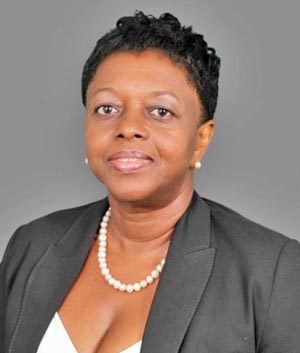 Dr. Valma Jessamy – brought the lawsuit against the bank

Attorney-at-law Jerry Edwin has said that the Grenada Co-operative Bank Limited (GCBL) has paid out on a judgement debt of $186, 000.00 owed to his wife Dr. Valma Jessamy for refusing to honour several of her cheques and taking action which deemed her to be a person of not good credit.

In a brief statement to THE NEW TODAY, Edwin said that the law firm representing the bank, Lewis & Renwick did not proceed with its threat to file an appeal Co-op Bank pays $186,000.00 to Dr. Valma Jessamy in Court Judgement against the order that was handed down last year by Master of the High Court, Jan Drysdale.

“An appeal would have been futile and I suspect this was the advice given to the bank …,” he said.

According to Edwin, the bank made the payment on Monday – the last day in which it had to file appeal papers to take the matter before the justices of Appeal for review.

The defence lawyer said that he was already in the process of filing an “application for committal (to the Richmond Hill prison) of the entire Board of Directors of the judgment debtor (Co-op Bank) for being in disobedience of the court order to pay the money.

The American-trained attorney accused the bank of engaging in what he said was “far too many tricks” during the course of the litigation of the matter before the high court.

“Imagine I suggested they send a letter of apology to the company’s creditors (and) in return my client would drop the lawsuit yet they refused. Turned out that simple one paragraph (of an apology) they refused to send ended up costing them 186,000.00 dollars,” he said.

Edwin told THE NEW TODAY that the intention of Dr. Jessamy is to donate a “significant portion of the judgment for a charitable environment educationable purpose” and that the details of those to benefit from the $186, 000.00 will be made available soon.

“The interest arose from an 82-day delay in obeying the Order of the court,” he said.

Dr Jessamy and her company, Jessamy Environmental Consultancy & Research Caribbean Incorporated sued Co-op Bank when it filed the first lawsuit of its kind in Grenada in 2014 when the financial institution refused to honour some of her cheques.

Lewis & Renwick had signaled its intention to appeal some aspects of the judgment but failed to do so.

Dr. Jessamy instituted legal proceedings against the bank on September 22, 2014 for defamation and breach of contract.

She alleged that by agreement in writing that the company had an overdraft facility with Co-op bank and that during the period May to June 2011 although the account had the requisite funds, the bank wrongfully and maliciously dishonoured 14 cheques.

In addition, she accused the bank of marking the same on the cheques “with the words ‘return to drawer’.

The environmentalist felt that this action on the part of the bank “communicated to its creditors that the Claimant (Dr. Jessamy) was not credit worthy”.

She also took offense to the fact that “one of those wrongly dishonoured cheques was prominently displayed at a place of business with the words ‘return to drawer’ written thereon.

“As a result, the Claimant’s reputation was irreparably damaged which resulted in loss of business,” said the lawsuit.

The Master noted that Co-op bank “failed to defend the claim and judgment in default was entered against it”.

The matter was referred to Master Drydale for assessment to determine “the appropriate measure of damages for an action in defamation and breach of contract” against the local bank.