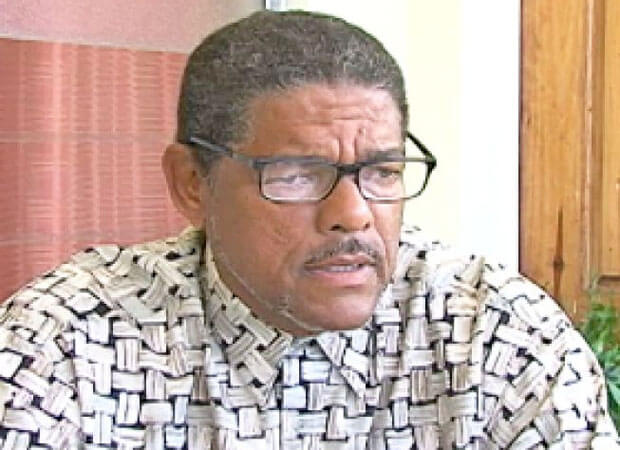 Keith Clouden – give the thumbs up to incoming Minister of Agriculture

Former Senator for Agriculture in the Upper House of Parliament, Keith Clouden has given a broadside attack on outgoing Minister for Agriculture, Yolande Bain-Horsford as he welcomed Member of Parliament for the Town of St. George, Peter David who is taking over the portfolio from her in early October.

Appearing on GBN’s “To the Point Programme” on Tuesday morning, Clouden described Bain-Horsford as “the worst Minister of Agriculture to have ever been appointed to that position” by any government in the history of Grenada.

The respectable farmer referred to the female Member of Parliament for St. Andrew South-west as “the most ineffective, uncaring, very thin-skin” person to hold down what was once a key portfolio in the Government of Grenada.

According to Clouden, under Bain-Horsford’s tenure, the island has witnessed the massive spread of a disease and an insect infection that has affected crops like sour sop, mango, citrus and ornamentals and that “I think that we have gone backwards” with Bain-Horsford in control of the Ministry of Agriculture.

He charged that even the recently launched farm labour support programme from government has failed miserably due to the lack of leadership provided by the rural MP.

“That (farm labour support) has been failing miserably to be quite frank and honest,” he said.

Clouden spoke of some of the persons employed on the programme only giving 1 and 2 hours of their time per day and that some of them are not even showing up for work.

“I have recognised that she has tried but not tried hard enough and she did not learn much on the job,” he remarked.

According to Clouden, the ruling New National Party (NNP) administration of Prime Minister Dr. Keith Mitchell “has a long history of downplaying agriculture”.

He said the regime which has dominated the local political landscape for the past 25 years has never really put someone at the helm to impact positively on the development of the agriculture sector.

In giving support to the decision taken by the Prime Minister to send Minister David to take charge of the island’s Agriculture sector in the first week of next month, Clouden said he expected to see something positive happening in the industry.

According to Clouden, prior to the announcement from the Grenadian leader, he had felt deep inside himself that Agriculture will be the most appropriate ministry to be given to David in the Cabinet reshuffle.

The small farmer said he did not share the view of some people that it was a demotion for David from Foreign Affairs to Agriculture because farmers and fishermen consider agriculture as “the most important ministry for us”.

“Peter David is quite suitable for that,” he added.

David is the first person from the heart of the capital that Prime Minister Mitchell has ever appointed to the post of Minister of Agriculture.

Clouden recalled that as boys growing up in the same neighbourhood in Archibald Avenue, he detected that at a young age David had “a tremendous passion for agriculture”.

He said that way back then in this Middle Class community “we all grew up doing small planting projects in agriculture as little boys growing up”.

“I have no doubt in my mind whatsoever – my expectations are that he will do a good job there,” he told the programme host.

Under David’s tenure, Clouden said he is hopeful that the Mitchell-led government can develop a land use policy and that the new minister will be prepared to listen, as well as meet and respond to the needs of the farmers and fisherfolks.

“I have some high expectations and I do hope that he would listen to us and effect the kinds of change from the ministry,” he said.

“I hope that he will be in a position to influence the Cabinet, influence the Prime Minister, influence his colleague ministers so that we can make agriculture what it ought to be,” he added.

Clouden contended that the incoming minister “has an opportunity to do that now and he will no doubt have to work along with the various organisations with farmers to achieve this”.