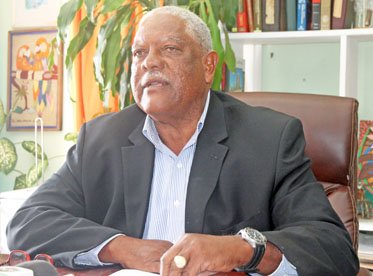 Seasoned criminal attorney-at-law, Anselm Clouden has blasted the Keith Mitchell-led government in St. George’s for allowing a plane with eight Chinese nationals to land at the Maurice Bishop International Airport (MBIA) in the midst of the Coronavirus epidemic in that Far-east country.

Clouden who lives in the vicinity of the airport expressed concerns that the plane would have arrived at MBIA in such an unusual hour in the morning.

“It was indeed unfortunate and quite irregular that a plane carrying Chinese personnel was able to land in Grenada without the necessary safeguards by way of quarantining those persons for the 14 days as the international scientific community has indicated as the incubation period”, he said.

“It is a dereliction of duty that the Prime Minister as Minister of National Security would allow a plane to land here with Chinese personnel without the necessary safeguards being implemented, (especially) having regards to the global concern and the global clamp down of travel from Beijing and Shanghai, Hong Kong and other countries within close proximity”, he added.

Clouden noted that a number of persons have already died from the Coronavirus and even the Government of the Peoples Republic of China (PRC) are struggling “to bring this thing under control.”

The outspoken attorney called on Prime Minister Mitchell in his capacity as Minister of National Security to take the necessary steps to establish proper quarantine facilities, which he suggested can be done within CARICOM if it cannot be done by one nation state.

“This ought to be a CARICOM issue because of the rapid travel between member states. So, CARICOM has to be involved because if we lack the capacity (and) the know how, then we have to help each other and look after each other because this virus if it gets into the Caribbean it can be catastrophic, it can destroy our economies, our livelihood and destroy us.

“The Prime Minister should, as a matter of pressing urgency, interact with his fellow CARICOM colleagues to implement a procedure whereby persons coming from that region of the world will be properly quarantined and protected… already those health care providers in China, they themselves are becoming sick and they have their protective gear.

“We have nothing here, absolutely nothing in place to arrest this virus should it enter our country. Until this virus is put under control those mechanisms must be put in place.

Clouden dropped hints that he is prepared to file legal papers in court to force the Mitchell-led administration to institute the proper mechanisms to protect the people of Grenada from the Coronavirus.

He said: “Failure to do that would result in some legal action being taken on the grounds of malfeasance and the Privy Council has said that a minister can be taken to court for acts of malfeasance.

“In this case, it’s an omission to introduce protective, mechanisms to protect as it were, the lives of the Grenadian people, that is paramount. Money is not as important as life so we are dealing with life and the protection and preservation of life”, he added.

According to Clouden, the Constitution of Grenada guarantees everyone in the country “the security of persons and if the Prime Minister neglects and abdicates his responsibility as Minister of National Security the other arm, the Judiciary would be called in to take appropriate measures to ensure that some definitive action is taken so as to avoid a catastrophe here in our country.”

“It is time that the Government of Grenada respond to … the concerns of the nation as a whole…”, he remarked.

The veteran attorney-at-law acknowledged that some “protective mechanisms” are now put in place but contended that what has been done is just not good enough to tackle the Coronavirus epidemic.

“…We just don’t have the capacity and I hope that they (government) take it one step further and solicit the assistance of CARICOM (the Caribbean Community) and that CARICOM work with all member states in ensuring that persons who come from that part of the world where the coronavirus has already taken toll be quarantined for 14 days, which is the scientific recommendation for the incubation period for observation and testing.

“So, I hope we introduce it here (but) it is good to see the government respond because the people were all prepared to take to the streets and indeed we are prepared to, if sufficient isn’t done – we have our legal options open.”