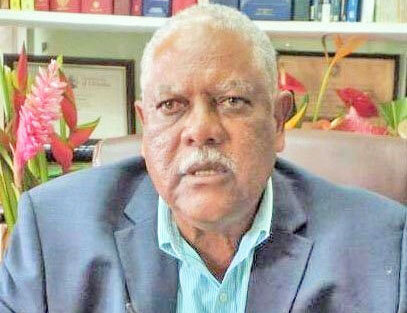 Attorney-at-law Anselm Clouden – is not supportive of mandatory vaccination

A Grenada government policy to force workers to take the COVID-19 vaccine has been described as a violation of human rights.

Attorney-at-Law Anslem Clouden has said the policy, announced in a national address by Prime Minister Dr Keith Mitchell recently, violates the individual’s right to privacy of their body.

The policy has been endorsed by the Grenada Hotel and Tourism Association (GHTA) whose members are anxious to resume business full time since the pandemic disrupted the tourism trade a year ago.

“People should rise up and if they don’t get paid take them to Court,” Clouden said in an interview last Friday with THE NEW TODAY newspaper.

Clouden does not oppose vaccination in principle and he is advocating the continued adherence to prevention protocols such as the wearing of masks, hand washing, physical distancing and avoiding large gatherings.

But he believes that making it mandatory to take a vaccine in the absence of a national health emergency goes against the Constitution of Grenada.

Last week, GHTA President, Leo Garbutt said mandatory vaccination of hotel workers is now a policy of the government and they will follow it.

At least one hotel, Silver Sands Resort has told workers that taking the vaccine will be mandatory to work at the resort.

Related:  Dr. Clarice Modeste-Curwen: Airport privatisation not on the cards yet

He said, “That is so unconstitutional. Unless there is a national emergency mandating every citizen to take the vaccination it is discriminatory”.

“Those are the types of emergencies contemplated by the Constitution. But you cannot force me to take a vaccine if I am not contagious. You must first test me and determine if I am contagious,” he remarked.

Just over 10, 000 Grenadians have taken the first dose of the Astra Zeneca vaccine which has been suspended in some countries after being linked to blood clots.

The target for Grenada health officials is to vaccinate 70, 000 persons but most people continue to resist forcing the government to increase pressure to get vaccinated.

Clouden, who was among the first to advocate a lockdown of the country last year, said what the government needs to do is tighten health protocol enforcement and heighten security at quarantine facilities.

He suggested that the traffic wardens whose legitimacy as traffic enforcers has been called into question, would serve better if used in the tourism sector to monitor and enforce health protocols.