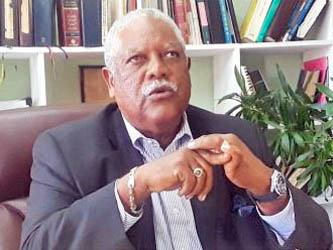 Experienced criminal defense attorney-at-law, Anselm Clouden has cautioned the Keith Mitchell-led government in St. George’s about passing any State of Emergency Powers legislation like the bill that was temporarily withdrawn on Sunday that gives sweeping powers of arrest and detention to members of the Royal Grenada Police Force (RGPF).

According to Clouden, the ruling New National Party (NNP) administration should come to the realisation that what Emergency legislation does is to effectively suspend the Constitutional protection that is guaranteed to citizens especially those provisions that deal with human rights.

In an exclusive interview with THE NEW TODAY, the outspoken lawyer said once you move to suspend the personal rights of Grenadians with new legislation as proposed it can only be for a certain period and not the one year as stipulated in the controversial coronavirus protection bill.

“I could see a number of constitutional challenge if that legislation (is) passed,” he said, while charging that the bill can amount to seeking to impose a martial law type of rule on the island.

“There is some ulterior motives to all of this under the guise of protection and preservation of health,” he added.

Clouden raised concern that the Bill was directing persons who feel their rights were being trampled upon to approach the Magistrate’s Court for redress and not a judge in the high court which is the correct body as provided for in the Grenada Constitution.

He feared that such persons could be forced to wait for years to get their matters heard in court while their constitutional rights continue to remain violated because of the bill.

The Mitchell government has announced that it was pulling back the bill for consultation in the face of strong opposition to some of the contents of the legislation especially among lawyers and sections of the young people.

The bill was also heavily criticized for its attempt to impose a $25, 000.00 fine and a jail sentence of one year on persons found guilty of violating the legislation.

According to Clouden, there is nothing wrong to take action to protect the health of the nation but one needs “persistent review of the legislation” and not over a one-year period.

“When you go into these legislative emergency laws you got to review (them) all the time especially given the state of our courts now. We are not functioning in normal circumstances and under normal conditions,” he said.

Clouden recalled that the first set of initial Emergency legislation that was passed by government to deal with Covid-19 had to be done in the first instance for 7 days and then had to be extended for a prescribed period and not as long as one year.

He argued that one cannot impose a State of Emergency giving the police extraordinary powers of arrest and detention without going through due process and the Constitutional protective mechanisms enshrined to ensure the security of the person.

Clouden acknowledged that the government can always pass Emergency legislation because the Constitution provides for the enactment of certain emergency provisions but it has to be careful that the constitution is not violated.

“You cannot suspend civil liberties and then put those extraordinary powers in the hands of the police – we are literally being turned into a police state,” he said.

The attorney-at-law stated that the one-year timeframe set in the emergency legislation act as proposed by the Mitchell-led government “is too long” and suggested that “there must be provisions for periodic review”.

“I don’t know why he (PM Mitchell) wants this for a whole year – that is oppressive to be quite frank. It would lead to a certain abuse of the citizenry because the police have an unfettered discretion,” he said.

According to Clouden, PM Mitchell with his 14-1 majority in Parliament has the necessary support to pass the bill but he should be mindful that he would have to contend with the voice of the people for imposing this kind of draconian legislation on them.

He said the bill should have been circulated by government first to the Grenada Bar Association (GBA) for consultation before taking it to Parliament in light of the fact that “it affects the constitutionally guaranteed rights of the citizenry in the Constitution of Grenada”.

“You can’t deal with those rights willy-nilly under the guise of some pandemic,” he remarked.

Clouden argued that the Mitchell regime cannot put forward the argument that the urgency of the legislation is necessary in order to tackle the pandemic due to the fact that the island is now referred to by government itself as being COVID-19 free.

Clouden pointed out that if a police officer arrest someone for not wearing a mask and for not engaging in Social Distancing those matters could be dealt with by a simple regulations like SRO’s and violators can be given a ticket to pay a fine and not under the draconian coronavirus bill.

Prime Minister Mitchell told a sitting of Parliament on Wednesday that the bill has been withdrawn for extensive consultation and hinted that it might not be brought back to the house for passage.