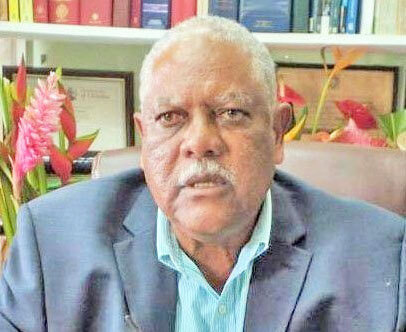 Anslem Clouden – prepared to give full support to the Assembly

Outspoken attorney-at-law Anslem Clouden who has been championing greater autonomy for the sister isle of Carriacou and Petite Martinique has made known his views on plans by the new Congress government proposed to establish a House of Assembly for Carriacou.

Clouden was responding to the views expressed by another barrister-at-law, George Prime who is serving as the Lead person in the Transition Team for the newly appointed Minister for Carriacou & Petite Martinique Affairs, Tevin Andrews.

He is suggesting that before any Act is put before the Parliament in St George’s on the issue that there must be islandwide discussion and participation in every village and on “Kim Radio” on the sister isle on the issue.

He also pointed out that the proposed House of Assembly should consist of five members, chaired by a Premier and four representatives, one from Petite Martinique and four from Carriacou.

According to Clouden, the Assembly also needs to address such issues and functions like the Police, Sanitation, Agriculture, a permanent Magistracy for Carriacou and establishment of a High Court, and for properties to be vested in the Assembly itself and a host of other inclusions that is “compatible with managing our own affairs.”

“There must be a Land Use policy in that the local Assembly must determine the sale of land and to whom – we must be able to determine and manage our resources for the benefit of all our people,” he said.

Following is Clouden’s response to George Prime who is also a former Minister for Carriacou & Petite Martinique Affairs under the 2008-13 Congress government of former Prime Minister Tillman Thomas:

Thank you for your email in relation to Carriacou and Petit Martinique local Government.

May I respectfully request a copy of the draft bill that is proposed to establish the Carriacou House of Assembly. I hasten to point out that the local Government Act you’ve referred to as the Carriacou and Petit Martinique County Council Act No. 20 that received royal assent on the 4th of April 1995 by the then Governor General, the late Reginald Oswald Palmer.

I respectfully submit that this Act is no longer relevant to the changing fortunes of time as circumstances affecting Carriacou and Petit Martinique’s economic development have rendered this act null and void. I say this in light of the recent political development with respect to the overwhelming success of the National Democratic Congress transformative agenda.

It is therefore my considered view which I have given anxious consideration to wit; the legislative establishment of a Carriacou House of Assembly Act that will take us forward for the next 100 years.

The framers of the constitution when they included Sections 107 (1) where it says, “There shall be a Council for Carriacou and Petit Martinique, which shall be the principal organ of local government in those islands”.

The Latin maxim “Expresso unius est exclusion alteris” when translated means the mention of one is the exclusion of another.

A Legislative Council with all the powers attributable thereto, the Tobago House of Assembly is one such Council. If the framers intended a County Council, they would have stated so in Section 107.

It is therefore my respectful view that having regard to our traditional history of business entrepreneurship as a maritime and sea-fearing people, it is our tradition to travel as far north as Saint Marteen and Saba to bring goods and services to our people without which we would have had no economy, no economic development and ultimately rampant poverty.

It is our seafaring tradition that has sustained our well-being; consequently we must give due recognition and consideration to legalising the Bubul Trade by declaring a Duty Free Status for Carriacou and Petite Martinique in the Carriacou House of Assembly Act.

It is therefore with great dignity that I claim as a grandson of one such mariner, Captain Cornelius Clouden alias Savew that through this honourable trade he was able to educate his son, my father and his grandson, me both at the Grenada Boys Secondary School – my father in the late 30’s, and me in the 60’s.

Carriacouans have grown accustomed and rely on quality goods that come to the islands, notwithstanding that the Customs and Coast Guard seize our goods, and at times our vessels and charge us exorbitant duties to recover the seized goods.

I therefore suggest that an inclusion in the draft bill to legalise that aspect of our tradition by making provision in the bill FOR A DUTY FREE PORT for Carriacou and Petit Martinique within the framework of Local Government.

This objective is achievable. This approach would not only enhance the economic development of Carriacou and Petit Martinique, but it would give Grenada a constant revenue stream rather that denying revenue to the Tri-island State.

It is my further respectful view that this economic provision is indispensable to the economic development of Carriacou and Petit Martinique. It would provide revenue to fund Local Government. I envisage Carriacou being the hub of economic activity for the entire Southern Caribbean, Trinidadians would flock our shores.

Another, income generation, industry, would be the cultivation of Cannabis for medical use, and other industrial purposes; Carriacou is well positioned for this activity.

Moreover, I suggest that the House of Assembly consist of five members, chaired by a Premier and four representatives, one from Petit Martinique and four from Carriacou.

With respect to other functions for example our Police, Sanitation, Agriculture, Permanent Magistracy for Carriacou and establishment of a High Court as is the case in Nevis; properties to be vested in the Assembly itself and a host of other inclusions that are compatible with managing our own affairs.

There must be land use policy in that the local Assembly must determine the sale of land and to whom; we must be able to determine and manage our resources for the benefit of all our people.

Finally, before any Act is put before the Parliament there must be islandwide discussion and participation, in every village and on “Kim Radio”.

I avail myself of this opportunity to renew assurances of my highest consideration and esteem.