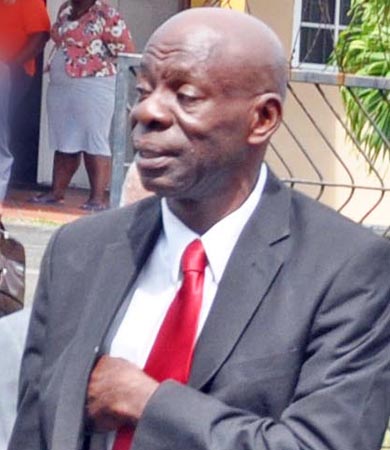 Cuban-trained security official, Cletus St. Paul who was once regarded as the most influential bodyguard around two Grenada Prime Ministers, has made his first appearance in a local court as a defendant in a sexually-related assault case brought against him.

St. Paul appeared Thursday before Acting Chief Magistrate Teddy St. Louis at the St. George’s No. 1 Magistrate’s Court to answer to two separate cases brought against him by the State.

It was the first time that the top security man around Prime Minister Dr. Keith Mitchell was coming face-to-face with the two women who filed complaints against him with the Criminal Investigation Department (CID) of the Royal Grenada Police Force (RGPF).

St. Paul had to wait nearly an hour to get a glimpse of his accusers as he showed up in the court long before its scheduled opening for the day’s proceedings.

“I see Cletus in the courtyard already. He came before 8,” a passerby told THE NEW TODAY in a brief telephone conversation.

Speculation is rife that St. Paul arrived very early at the court in order to avoid reporters and ahead of his two female accusers.

A well-placed source said he noticed that the top bodyguard sat up front in the court and never once did St. Paul turn around to look at his accusers.

“He dey play he writing. He was uncomfortable. His hand (is) shaking. He looked feeble. He dey playing innocent as if butter can’t melt in his mouth…”, said the source.

According to the official, he noticed that St. Paul turned around and watched in the direction of the two female accusers when the Magistrate announced the date for the next hearing of the case.

Several police officers were noticed inside the court apparently to get a first-hand look at the two female accusers of the nation’s top security official.

St. Paul was represented at the hearing by Attorney-at-law, Ruggles Ferguson of Ciboney Chambers.

The two of them were on different sides in the bloody political unrest in the country in October 1983 when a bitter internal feud erupted within the then ruling Marxist-oriented New Jewel Movement (NJM) that had created the 1979-83 Grenada Revolution with the coup d’état against the elected Eric Gairy government.

St. Paul was the chief bodyguard of executed Prime Minister Maurice Bishop and provided the key piece of evidence in the court trial that convicted 17 former army and government officials for the bloody massacre on Fort Rupert, now back to its original name Fort George.

Ferguson was identified as a supporter of the NJM faction that was loyal to ex-deputy Prime Minister Bernard Coard, who became Joint Leader of the party with Bishop in a move that created the turmoil in the party and the subsequent executions.

The two women who filed separate sexual assault cases against St. Paul were referred to him by Prime Minister Dr. Keith Mitchell to assist them with housing problems.

One of the women alleged in a statement to the police that St. Paul used a finger to push into her vagina without permission and the other female complained that he used force to try to get to her breast to suck it.

St. Paul is on EC$20, 000.00 bail in both criminal cases of sexual assault brought against him.

The matter was adjourned until February 1, 2021 by the Acting Chief Magistrate.

A city lawyer has told THE NEW TODAY that a third woman has indicated to him that she was also sexually assaulted by St. Paul.

However, the woman who lives in the north of the island is reluctant to issue a statement to the police due to fear of attracting publicity and the fact that she recently got engaged to her would-be husband.