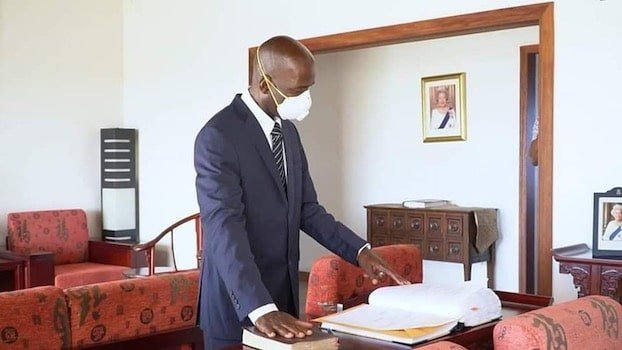 Tobias Clement – receiving his Instrument of Appointment as Opposition Leader

Battling COVID-19 cannot remain in the hands of a dictatorship

This is the warning sent out to the Keith Mitchell-led ruling New National Party (NNP) government by newly elected Leader of the Opposition in Parliament, Tobias Clement, the current Member of Parliament for St. George North-east.

Speaking to reporters at his first press conference after receiving the Instruments of Appointment by Governor-General, Dame Cecile La Grenade, the island’s new Opposition Leader warned the Mitchell government that it can expect “stiff opposition” in parliamentary sittings and debates from henceforth.

“We need a broad spectrum of ideas to plot our way forward through the coming weeks. After the government lifts the current state of emergency, we will need strong debate on the rejuvenation of our economy, inclusive of all sectors, and the use of our scarce resources,” he said.

Clement’s appointment as Leader of the Opposition came as the island is currently into a State of Emergency to battle the deadly coronavirus in which the Royal Grenada Police Force (RGPF) has been given sweeping powers to arrest citizens for violating curfew regulations.

According to Clement who quit the NNP about three months ago, he never anticipated that he would one day hold the reigns of Opposition Leader in Parliament but he is ready for the task that lies ahead.

He said: “…When I ran for elections in Carriacou and Petit Martinique for the first time in 1995, at a tender age, I did not fathom that one day, it would become necessary for me to transition into being the Leader of the Opposition in parliament. Like everyone else, and being part of a winning team, I saw myself as a member of government assisting my constituents with their daily lives. But life had other plans for me. I am called upon to challenge the government and to outline alternative ways of developing Grenada, Carriacou and Petit Martinique.

“…My plan is simple. I will lay before the House of Parliament new and innovative ways to conduct the nation’s business and move our country forward. This will be opposition as you have not seen before. I will meet with my parliamentary team regularly to discuss our strategy. Between us, we will put forward our plans for the development of this country,” he added.

Clement is known to have told close aides that PM Mitchell showed his “dictatorial tendencies” when he announced at a party meeting that former Congress General Secretary, Peter David will be running in the 2018 general election.

The St. George MP quoted Mitchell as saying that people in the NNP can call him a dictator if they want but he is telling them here and now that David will be a candidate in the election.

The new Opposition Leader told reporters that he is not naïve about the demands of what he called “this new journey” in the political battle that lies ahead.

He spoke of the need to buckle down to the job with ”a clear presence of mind, independent thinking, broad public involvement and creative options”.

“We have a hard road to travel and a long way to go. I invite you to come with me along this rugged road, and some day we will be victorious. Someday we will reap the rewards of our labour,” he said.

Clement dropped hints that the days of the NNP running the country entirely through the Cabinet of Ministers is over and that the business of the State must now be conducted in the halls of Parliament.

“We must hold this debate in parliament and not cabinet. In addition, we must take the decisions on the expenditure of our money in parliament,’ he remarked.

Clement is expected to shortly name at least two of his three nominees to serve in the Upper House of Parliament.

THE NEW TODAY understands that he will keep one of the two Senators now aligned to the main opposition National Democratic Congress (NDC) party and introduce as a new Senator a female worker at St. George’s University (SGU) where he is currently employed.