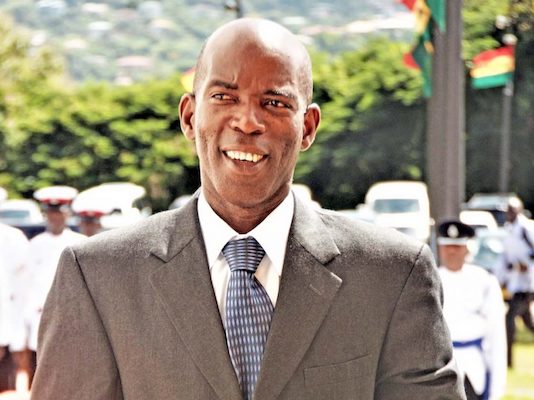 In a scathing attack on the Prime Minister, Clement said that he would refuse to occupy the constitutionally provided Office of Opposition Leader set aside for him to perform his functions in Parliament Building at Mt. Wheldale under the current existing conditions.

According to Clement, the Parliament building is not independent and that some of its functions are under the direct control of the Ministry of Works, headed by Gregory Bowen, the current number two man in government and deputy political leader of the ruling party.

“When I went to ask the Clerk of Parliament for the keys to see the office he had to call the Ministry of Works to get the keys for me,” he said.

Clement, the elected Member of Parliament for St. George North-east, indicated that a key was eventually given to him but he does not have the other keys to gain access to the building through the side door to come in and go out in a private manner.

“I do not have access to the Parliament building in that regards as yet,” he said.

The newly installed Opposition Leader also highlighted the plight of his personal secretary who has been forced to operate in the open from the lobby section of the parliament building.

He said it is unbecoming that his secretary has been put in an uncomfortable situation of having to take calls on his behalf in front of other persons.

“The secretary to the Leader of the Opposition must have privacy in a private office,” he remarked.

Clement also pointed to problems with the telephone provided for his use because it is not independent but under the direct control of Bowen’s Ministry of Works.

The Opposition Leader expressed fears that personnel in the Works ministry can be monitoring his private conversations.

The former NNP executive member also accused the Mitchell-led government of maintaining a stranglehold on Parliamentary democracy in the manner in which it has “unconstitutionally” removed the votes of all Parliamentary Constituency offices from Parliament and put them under the direct control of the Office of the Prime Minister.

He charged that a private contractor who is from Dr. Mitchell’s St. George North-west constituency is now running those offices at a fantastic monthly fee.

Clement said: “Never in the history of Commonwealth Parliament or democracy that the constituency offices are administered under the Prime Minister’s ministry. How could I subscribe to this thing?

The island’s sole opposition MP in Parliament chastised the the main opposition National Democratic Congress (NDC) for not engaging in serious politics and should be joining with him in “talking about” these developments in a crusade to save democratic Institutions.

This is an obvious reference to a statement put out earlier in the week by the NDC Public Relations Officer (PRO), Claudette Joseph taking issue with what was said to be misleading statements made on two occasions that identified her as part of a delegation from Congress who held talks with him.

Clement admitted “the error” saying that he mistook her name for that of the party’s Chairman Terrence Moore.

The St. George North-east MP described his battle on the issue of the vote for parliament as “part of my fight” against the dictatorial policies of Prime Minister Mitchell.

“Democracy has been hijacked already,” he quipped.

Clement charged that the so-called independent Parliamentary Constituency offices are currently being used “as sub-offices” under the direct control of the NNP from the ruling party’s head office at Mt. Helicon on Upper Lucas Street in St. George.

“I have emails to support that the General Secretary of the party (Roland Bhola) is sending emails to the constituency office managers to follow certain directives for NNP … so taxpayers’ money are paying for that,” he said.

“If you go back to my statement in Budget 2019 (debate), I read part of the letter that Bhola sent to the Constituency offices thanking them for data gathered for the New National Party.

Bhola is a former Minister of Agriculture in the 2013-18 NNP government and served as MP for the rural St. George North-east constituency up to the 2018 general election.

According to Clement, he has been making these revelations for some time now about the dictatorial control of Grenada’s parliamentary democratic system by Prime Minister Mitchell but no one was apparently listening to him.

He said it is time for not only the Caribbean but the outside world to be made aware of the trampling of democracy in Grenada under the Prime Minister and his NNP regime.