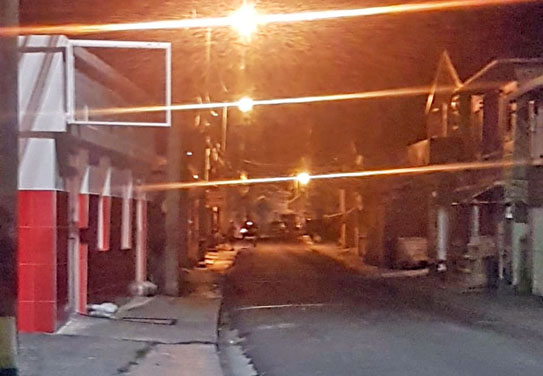 A glimpse of empty streets inside Hillsborough at night

Opposition Leader Tobias Clement is predicting that the ruling New National Party (NNP) of Prime Minister Dr. Keith Mitchell will lose the Carriacou & Petite Martinique seat in the upcoming general election due to the closure of the Hillsborough jetty.

Speaking to THE NEW TODAY on Monday, Clement who is on a short visit to the sister isle said that the decision of the government to relocate the main port from Hillsborough to Tyrell Bay in Harvey Vale has resulted in the virtual death of the private sector in the capital city of the small island.

He accused the NNP regime of “destroying” the economy of Carriacou by the unfortunate decision to relocate the main port facility and that the island has now become a very “depressed” place.

He said the residents on the small island are no longer doing the amount of business transactions as they previously did due to the fact that it is now costly and difficult to travel to Harvey Vale and bring back their goods to Hillsborough where the main stores and hardware stores are located.

“If you go to Carriacou now and you say you are spending a week or weekend and you walk around, you can’t even find food to eat now because nobody ain’t going and cook food when nobody ain’t coming to town for anything again.

“It’s a ghost town now – you come to Hillsborough now and by 8 to 9 o’clock in the morning you do your business and you get out and that’s it. No life again there until the next day for an hour, half-an-hour and that’s it. Hillsborough is gone – that is the truth.

Clement charged that the current Member of Parliament for the constituency of Carriacou & Petite Martinique, Legal Affairs Minister, Kindra Maturine-Stewart will pay a big price on Election Day for that unwise decision of the NNP administration to relocate the port.

“….Hillsborough is now a dead, dead town day and night – nothing ain’t going on there now. The little life that they had they (government) took it away,” he remarked.

“I went around Hillsborough Friday night, Saturday night …Hillsborough is gone – it is so sad that you take away the breadth, the lifeline (from the city),” he said.

He went on: “These people (NNP) have lost Carriacou permanently. I don’t think they can come back from where they are right now”.

According to Clement, a town or city always depends on its livelihood, vibrancy and exuberance on the port facility and that is now not the case with Hillsborough.

He said that there are a few hundreds businesses in Hillsborough and that when the port is taken away then “all businesses suffer because it (port) is the hub of action.

He added that Tyrell Bay in Harvey Vale where the new port is located does not have any space to expand for businesses.

According to Clement, the backlash for the Mitchell-led NNP in Carriacou will be felt from now until the next polling day due to the issue of the relocation of the port to Harvey Vale.

The Opposition Leader said that he cannot see how the ruling party will be able to hold onto the seat in the next election given the amount of negative feedback on the ground against the NNP on the sister isle.

He stated that it will be extremely difficult for the NNP to hold onto the seat which it has had a stranglehold on since the 1999 general election through attorney-at-law, Elvin Nimrod who has since quit frontline politics.

“I do not know how they (NNP) are coming back from that Hillsborough (jetty issue) – they can’t come back from where NNP is right now in Carriacou – they are gone. The situation for the people and the businesses in Hillsborough is a very sad one,” he said.

Clement stressed that there is nothing wrong with the port at Harvey Vale but the residents are in support of Hillsborough continuing to have its own port to service the community there.

He said that all the hardware stores, restaurants and bars and other private sector enterprises are in Hillsborough.

“You do not have the traffic of people anymore to come to Hillsborough to satisfy any business structure in Hillsborough,” he remarked.

Clement told THE NEW TODAY that as he moves around, he is getting the impression that “slowly all over Grenada these people (NNP) are going down”.