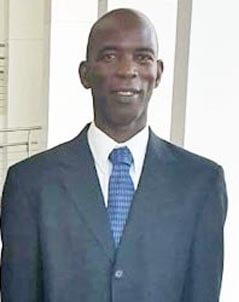 Opposition Leader Tobias Clement is questioning the correctness of the appointment of former Chairman of the Marketing & National Importing Board (MNIB), Senator Christopher De Allie to the Public Accounts Committee (PAC) in Parliament which is responsible for overseeing the affairs of statutory bodies.

PAC Chairman is a position usually held by the Leader of the Opposition, however, Sen. De Allie, who is the Private Sector representative in the Senate, was made PAC Chairman because there was not an elected Opposition Leader following the March 2018 elections, in which the New National Party (NNP) of Prime Minister Keith Mitchell won all 15 seats.

However, Clement who was an elected member of the winning party at the time, did not hold any ministerial position and resigned from the NNP in November 2019, citing “dictatorship” coming from PM Mitchell as a major issue leading to him crossing the floor to become Leader of the Opposition.

Clement said that Sen. De Allie should never have been a member of the committee in the first place because he sat as the Chair of the Board of Directors of Marketing Board, which has been the subject of an investigation by the Integrity Commission for alleged financial corruption since September 2018.

“It was brought to my attention that Sen. De Allie should never have been a member of the Public Accounts Committee because he sat as the Chair on the Marketing Board and as long as you are on the Board of any statutory body or any government entity that the Public Accounts Committee would have to investigate at one point in time, then you should not even be on the board even to recuse yourself,” he told reporters at a virtual press conference on Wednesday.

When contacted on Wednesday for comment on the issue, De Allie, who confirmed that he has been serving on the PAC for about two years now dismissed the charge from the Leader of the Opposition.

“There was no objection made by the then member who was a member of the PAC as well,” he said, adding that he is “not aware of any rule that prevents me serving on Public Accounts Committee and being a Senator.”

“I presume that the Opposition Leader’s conflict of interest is in respect to me serving as a member of a board that may come before the Public Accounts Committee for review. In that case if I served as a member of a board before Public Accounts and it hereby exists that I declare my interest and I step aside, that is how these thing are normally dealt with so I am not certain why he believes there could be a conflict of interest if that matter comes up… because a conflict only comes up if I refuse to declare my interests,” De Allie added.

DeAllie, regarded as a supporter of the ruling party, has also been appointed by the Mitchell-led government to chair the committee that has oversight of the island’s passport selling scheme known as Citizenship By Investment (CBI).

Speaking with THE NEW TODAY via telephone following Wednesday’s media brief, Clement questioned the reason behind De Allie’s appointment and expressed the view that “when you look at it, you do not have to wait until people call to find out (what’s happening) as it is now stated under the Westminster style democracy, if you are a Senator and you are on any board of any government organisation or statutory body you cannot be a member of the Public Accounts Committee.”

“I am young in the business so, I may not have known that he sits on the Board of the Marketing Board or even as Chairman of the Board was not supposed to be on the Public Accounts Committee but when you think about it some of us that call ourselves elders and fathers of the House because we have been there for so long, you think we do not know what we are doing?

“…If you are there for three, four and five terms then you would have known that it’s not supposed to be so. So, these things should be fixed in the future…and not only that but the structure of the committees would have to be looked at a second time.

“…This is what I find Parliament, under the directive of the Speaker and the Clerk of Parliament would have to move to correct…so, I am looking to the Parliament … and …for them to rectify.

The Member of Parliament for St. George North-east also said he is “hopeful that we would meet and re-organise the committees.”

“I believe I heard the Speaker make reference that some of the Committees of the House may have to be re-organised the way they are supposed to be organised,” he remarked.