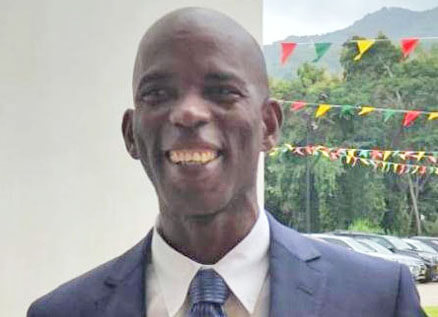 Tobias Clement – the Member of Parliament for St. George North-east

Grenada’s Opposition Leader, Tobias Clement has expressed concerns with the nightly figures released by the Ministry of Health on its Dashboard with respect to the Covid-19 situation in the country.

In an exclusive interview with THE NEW TODAY, Clement, the Member of Parliament for the St. George North-east constituency in Parliament, said it is clear to him that the figures given on the Dashboard “aren’t truly reflective of what our population is like in terms of people who are affected.”

“Imagine on their testing regime when they test, one in three persons have Covid – it means therefore if you extrapolate that into the population there could be more than 33, 000 Grenadians with Covid and in some cases the test is showing one in two persons,” he said.

“So it (the Covid-19 positive figure) is going up and it is going up exponentially. I do not believe that we have the wherewithal,” he added.

Speculation is also rife that the Covid-19 death toll of 73 as of Tuesday night on the Dashboard is not reflective of the figures at the three private Funeral Homes on the island, which is believed to be closer to the 100 mark.

The Opposition Leader made his statement against the backdrop of a meeting held in the past week with Prime Minister Dr. Keith Mitchell in which the Minister of Health, Nickolas Steele was invited to participate as he was the one in the Cabinet of Ministers with Covid-19 statistics.

According to Clement, Prime Minister Mitchell did inform him during the session that the people who work on the national Covid-19 team “are exhausted – they are stretched to the limit” and need assistance.

“One of the things that was striking to me – it seems they have made a call to the private doctors in Grenada to get on board and help and they are not willing to come forward,” he said.

Clement pointed out that he told the Grenadian leader that given the gravity of the Covid-19 situation on the island, the Prime Minister should move immediately and ask the U.S government for a mobile Field Hospital and that the Southern Command of the U.S Army can provide such assistance.

The Opposition Leader disclosed that prior to his engagement with PM Mitchell, he had personally contacted the U.S Chargé d’affaires with responsibility for Grenada to ask for a Mobile Hospital to be dispatched to Grenada to help bring the Covid-19 situation under control.

“He (The U.S Envoy) said he would look into it … and even if he gets the approval he would also have to get the approval of the government of Grenada,” Clement quoted the American diplomat as saying.

“I don’t think at this point in time the Government of Grenada will refuse anything,” he remarked.

Apart from the conversation he had with the U.S Chargé d’affaires, Clement said he had also sent a formal letter to him asking for general help in dealing with the coronavirus pandemic in Grenada.

“He (The U.S Envoy) did indicate to me definitely that the Grenada situation is alarming,” he remarked.

The Opposition Leader told THE NEW TODAY that another proposal he put forward to Dr. Mitchell in the meeting is for the government to revisit the Entry protocol in which persons are quarantined for only 2 days whereas the incubation period for the virus is 5 days to show itself in an individual.

“I don’t think that (protocol) is ever going to be revisited,” he said.

The ruling New National Party (NNP) administration at the Ministerial Complex in the Botanical Gardens has been shooting down the suggestion on increasing the Quarantine days from many quarters in the country.

According to Clement, he also raised the issue of Community Mobilisation, Education and training for persons in the overall battle against the deadly virus.

“I don’t know if they (government) know anything about that but I know that they did a little bit of Mobilisation,” he said.

The St. George North-east representative indicated that he also urged Prime Minister Mitchell to invite foreign doctors and nurses who have graduated from Grenada over the years and who are serving in all different parts of the world to come to the aid of the country in the deteriorating Covid-19 climate.

“It is true that Grenada has produced more doctors per square mile than any other country in the world”.

According to Clement, a lot of the doctors who were trained at St George’s University (SGU) have “an infinity for Grenada.”

He said: “They are serving all over the world and some of them are willing to come back home and give their service.”

SGU gives 15 scholarships per year to Grenada and as such a large number of Grenadians have qualified as medical doctors at the True Blue-based medical school.

The school was created by an act of Parliament passed in 1976 by the then Grenada United Labour Party (GULP) government of late Prime Minister Sir Eric Gairy.

According to Clement, it seems to him that the structure is not in place under the Mitchell-led government for National Mobilisation at home and abroad in the fight against Covid-19 and this is something that must be looked at with urgency.

The Opposition Leader also said he raised with PM Mitchell the issue of a national day of prayer in light of the fact that Grenadians are a spiritual people.

“If there’s a need for a National Day of Prayer it should have been done already,” he remarked.

However, Clement said Prime Minister Mitchell informed him that the Minister of Religious Affairs, Emmalin Pierre is looking into it and the day after the meeting it was announced that government had set aside September 25 and 26 as National Days for Spiritual Reflection.