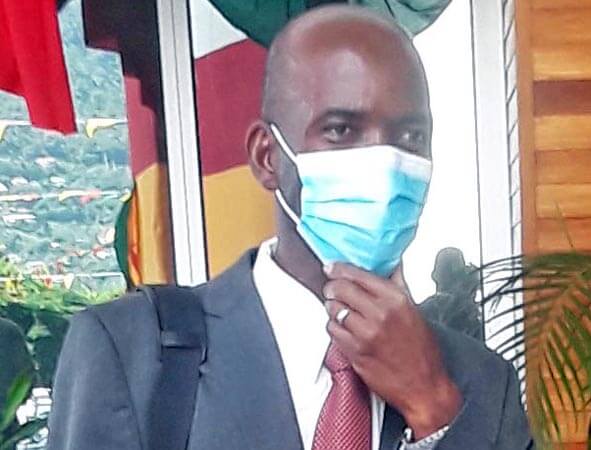 I do believe a lock down is necessary because if as it were, the borders were open and you do not implement the right protocols you see what happens.

This is the view expressed by the Leader of Opposition in the Lower House of Parliament Tobias Clement in an exclusive interview with THE NEW TODAY on Tuesday.

Clement spoke against the backdrop of uncertainties regarding the intensity and spread of COVID-19 on the island due to the ongoing cluster of cases discovered at Sandals resort.

Grenada’s figures skyrocketed from 41 to 85 within seven days with most of the cases linked to the hotel located in the south of the island.

The elected Member of Parliament for the St. George’s North East constituency who became Opposition Leader after resigning from the ruling New National Party (NNP) government a year ago contended that while government has refused to close the borders at this time, they would have no choice if the situation worsens.

Clement expressed serious concerns over the increased risk of community spread with this new wave of transmission, which has now spread to several communities in different parts of the country.

“I think we are indeed in a very fluid situation…and we must come to a point where we have to earnestly say, let the country rest for a while, seven to 14 days and let us see where it might pop up because in terms of that kind of callousness, COVID-19 in my judgment could be anywhere by anybody now.

“Probably the government, they get caught between a rock and a hard place (so that) for a few dollars, you would jeopardise your entire population but it will cost you more in the long run than having it (the borders) closed for a couple weeks just to ascertain as to where COVID-19 is now in Grenada.

“My question is, how do you know now what is the intensity of the spread? We don’t know and so, we might see one person popping up here or there because of interactions and some of us might innocently come in contact with somebody who maybe contracted the disease and we don’t know and this is what I am saying – we have to get a handle on”.

Clement was doubtful that the Keith Mitchell led government has the outbreak of Covid-19 on the island under control.

He took issue with government’s disposition to close the borders in March following the first wave of the virus as opposed to its position to keep it open now.

He said: “When the United States and England were struggling with COVID-19, you locked the borders down; now, COVID-19 has hit the United States (with) the higher number of deaths and infections in days, (along) with England and Canada and now you’re saying okay, we will open up to them but let’s do PCR testing on them (but) the PCR test is not 100% proof, it’s only up to 90% proof. So, what happens to the individual who got away from under the PCR test?

Pointing to the 7-day restrictions announced during a national address by Prime Minister Keith Mitchell on Monday, Clement urged the nation’s populace to be each other’s keeper.

“In my opinion, the population and the people, you and I would have to take matters in our own hands…because now we see that we cannot depend on government for (our) personal safety.

“You have to be your brother’s keeper and you have to (also) be your keeper…take the necessary measures to protect you and your family?

“We should all behave in such a way that we treat the next person as if they have COVID too, until we get a handle as to what is the intensity of the outbreak in Grenada.”