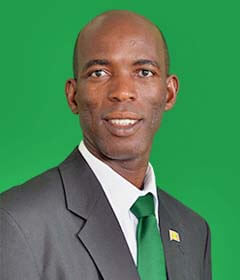 Grenada’s Opposition Leader Tobias Clement fears that about 15, 000 persons on the island could now be affected by the deadly coronavirus.

In an exclusive interview with THE NEW TODAY, the St. George North-east Member of Parliament said he was aware of tests that were done about three weeks ago that showed that one in every ten persons tested for the deadly virus came back positive and that would mean about 10, 000 persons in the population of 100, 000 could be impacted by the disease.

“In my humble opinion, if the Science is correct it could have at least right now 15, 000 active Covid cases in Grenada,” said the Opposition Leader who has a background in Science.

“A lot of people have Covid – Covid is everywhere,” he added.

Clement felt that there could be “one huge wave in Grenada that government can’t do anything about right now.”

The Opposition Leader who is from the sister isle of Petite Martinique is said to be getting closer to a meeting with Prime Minister Dr. Keith Mitchell to discuss the Covid-19 crisis on the island.

He confirmed reports that his Secretary on Friday called the Press Secretary in the Office of the Prime Minister to try and arrange the meeting.

THE NEW TODAY understands that the Prime Minister has agreed to meet with the opposition leader at 8am tomorrow morning.

He was critical of Prime Minister Mitchell and the ruling New National Party (NNP) government for handling the Covid-19 situation in what he called “a piecemeal” effort and approach.

He said the time has come for the ageing 75-year old Grenadian leader to start speaking to the Grenadian people about “proposals” to handle the deteriorating crisis with the virus on the island.

There are reports that at the early onset of Covid-19 that health professionals had suggested to the regime through Health Minister Nickolas Steele that the Housing building at Marine Villa should be upgraded and used as a Covid-19 centre for treating infected persons given its close proximity to the St George’s General Hospital.

In addition, the then Political Leader of the main Opposition National Democratic Congress (NDC), Franka Alexis-Bernardine had put on the table in a meeting with Prime Minister Mitchell that the Princess Alice hospital at Mirabeau in St Andrew should be converted into a full-fledged facility to handle Covid-19 cases.

THE NEW TODAY also understands that advisors to the Opposition Leader have advised him to call on Dr. Mitchell to make an urgent appeal to the Government of Cuba through its resident ambassador on the island for help in combating the ravaging Covid-19 virus in the country.

Latest figures released from the Ministry of Health on Monday night put the number of persons infected by Covid-19 at 2646 since the virus was first detected on the island in March 2020 and a steady rise in hospitalisation rate from zero three weeks ago to 68 at the moment.

Grenada is currently without diplomatic representation in Cuba as the island’s Ambassador Claris Charles has been back home for nearly a year now allegedly engaged in political work for the NNP in Clement’s St. George North-east constituency.

According to the Opposition Leader, one of the biggest blunders made by the Mitchell-led government in the fight against Covid-19 and is still to be corrected is the loophole in “reducing the quarantine time for people coming in to two days when the science says that you need at least seven days for incubation (of the virus) in the body for the test to pick it up.”

He said: “Suppose you come in with a negative test and in your travelling you contracted the virus – when you come in at the airport they do a PCR test, it will show you negative. When you leave the quarantine they don’t test you again even after two days.

“… It will take up to seven days incubation in the body for the virus to show itself but how did we come with this 2 day quarantine. And while we are locking down Grenada that loophole is still open. Maybe the economy is more important than the people,” he added.

The island has seen its death rate rocketed from one about a year ago to 35 on the Government’s Dashboard on Monday right.

Speculation is rife that the figure could be higher as they might reflect only persons who died in government facilities and not those who died elsewhere including Homes for the Elderly and at private homes after seeing their local physicians.