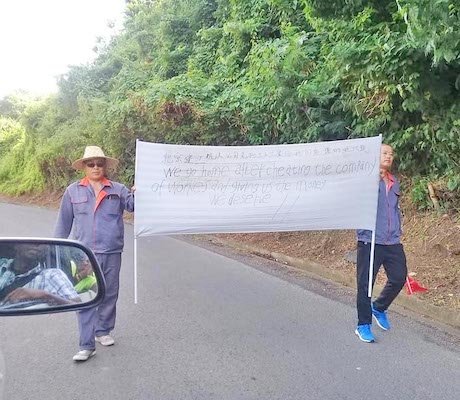 Member of Parliament for St. David, Caricom Affairs Minister, Oliver Joseph has dismissed reports that two Chinese nationals, who recently took to the streets in his constituency to protest against unpaid wages and poor working conditions were not employees of the private Chinese company currently erecting houses under Phase II of the Chinese Housing Project.

Minister Joseph was at the time responding to questions posed by the media during last Tuesday’s Post-Cabinet Press briefing held at the Ministerial Complex in the Botanical Gardens.

He confirmed that the two Chinese workers were protesting against “unpaid wages and the conditions (under which) they work” but he did not elaborate on the issue.

“The two people, they were assigned to the La Sagesse Farm, (and) not the Chinese Housing Project,” he said, noting that the protest was “a separate matter and (that) the government is not responsible for their conditions of work and for paying them.

“They work with the Chinese government on the farm project (and) it has absolutely nothing to do with the building of the houses because that’s a separate contract and that is going on smoothly and on schedule,” the minister said.

When contacted by THE NEW TODAY on Monday, an official at the Chinese Embassy in Grenada admitted to having knowledge of the incident involving the two Chinese workers but did not confirm or deny whether or not they were attached to the La Sagesse Farm.

In a statement on the matter, the Chinese Embassy said: “After investigation, we learned that two Chinese workers have acted excessively due to dissatisfaction with the contractor’s disciplinary actions upon their violation of working discipline. After a thorough dialogue and communication with the manager of the company, the two workers have admitted their mistakes. The issue has been solved in a peaceful and friendly way.”

A private Chinese real estate development company, Gao Zhen is currently engaged in the construction of 226 low-income houses in Corinth, St. David, as part of Phase II of the Chinese low-income housing project.

Construction began on the site last year, as well as at four other locations on the island including at the Villa in St. Patrick, Beausejour in St. George, Dumfries in Carriacou and Diamond, St. Mark.

A total of 350 units have already been distributed from the first phase of the Chinese project at Mt. Gay, St. George and Soubise in St. Andrew.

AG Ramdhani under fire from lawyers