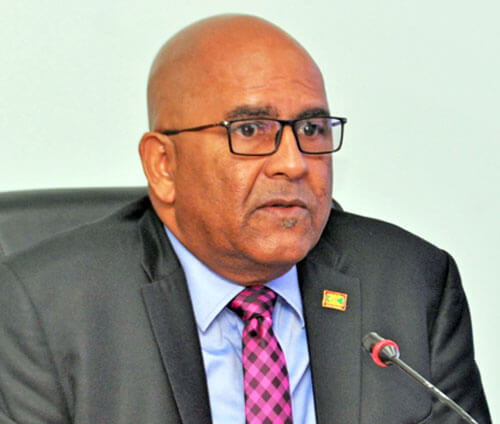 A seasoned Caribbean diplomat believes that the Grenada government of Prime Minister Dr. Keith Mitchell has become the laughing stock in the region following reports that nationals from Mainland China make up nearly 50% of its diplomatic passport holders travelling around the world.

The envoy who spoke to THE NEW TODAY on condition that he was not identified made the comment against the backdrop of a report carried in last weekend’s online version of the newspaper that 28 of the 60 persons listed as having Grenada diplomatic passports were nationals of China.

According to the diplomat this is cause for concern because what the Mitchell-led government is doing by handing out these diplomatic passports to all kinds of non-nationals was never the intention of the United Nations Geneva Convention which provides privileges and immunity for the diplomatic agent of a State.

“We are the laughing stock of the region – that’s a fact. It’s a frightening thing. We are now relegated to being worse than a banana republic,” he remarked.

The experienced career diplomat from the English-speaking Caribbean described as “a new low” the issuing of diplomatic passports to these Chinese citizens to become part of the Foreign Service of the administration in St. George’s.

He stated that what the Grenada government is telling the international community is that it is giving “someone who has sworn allegiance to another country, in this case China – the privileges and immunities including from time to time functional privileges that goes with carrying out certain acts for the State of Grenada”.

The Caribbean diplomat questioned whether the Chinese government in Beijing will ever appoint a Grenadian as one of its diplomats.

“Look at the Chinese Foreign Service and ask yourself how many non-Chinese nationals you think is in the Ministry of Foreign Affairs in China,” he said.

According to the diplomat, China has had long established diplomatic relations with Jamaica, Barbados, Trinidad & Tobago and Guyana and that none of these government stooped so low as Grenada to appoint a Chinese national to its Foreign Service.

He said: “I can bet you that not one of those countries had one single Chinese carrying a Jamaica, Barbados, Trinidad and Guyana diplomatic passport. In short not one of them have had the temerity to go the distance in Beijing as a Caribbean state and appointing a Chinese national to their foreign ministry.

The diplomat noted that Cuba has had the longest standing relations with China as a Caribbean country and never did any such thing as the regime in Grenada.

THE NEW TODAY recalls the diplomatic embarrassment caused to Grenada during the 2013-18 NNP term in office when, then Foreign Minister, Nickolas Steele attempted to appoint a number of Chinese nationals in Hong Kong to diplomatic status as part of a move to set up a diplomatic post in the Chinese-administered office.

The authorities in Hong Kong had to remind Minister Steele that he had to raise the matter directly with Beijing and not them.

The Caribbean diplomat dropped strong hints that Grenada might be engaged in some kind of monetary transaction with the granting of diplomatic status with so many non-nationals.

He said: “I hear that there is a growing token of appreciation which is sort of the elite membership of the Citizenship By Investment programme – and I hear that goes anywhere from $500, 000 to one million.”

According to the official, he has strong reason to believe that the price for a diplomatic passport in these small islands will he high priced since the ordinary passports under the CBI programme is selling for US$200,000.00 on average.

The Al-Jazeera network had recently done a documentary on the Sale of Diplomatic Passports and it was reported that some Caribbean politicians are selling them for upwards of US$1 million each.

According to a well-connected local professional with close ties to the NNP administration, he is puzzled as to why all these people need to be given ambassadorial status and diplomatic passports by Grenada.

THE NEW TODAY has made approaches to the regime in St. George’s on the status of Ambassador Charles Liu, the Chinese who was once linked to the billion dollar investment project at Mt. Hartman in the south of the island.

A local businessman who was part of Liu’s local outfit told this newspaper that he was surprised that the name was not seen on the list that government submitted to Parliament in answer to a question from Opposition Leader, Tobias Clement.

The following question was sent to Philomena Robertson, the Press Secretary in the Office of the Prime Minister and did not receive a response: “Good day … I notice that you did not open my last message to you. I hope that you will do so this time around as I am trying to find out if Charles Liu was ever given a Grenada Diplomatic passport. I await your response”.

The local businessman said he doubted that Grenada’s inexperienced resident Ambassador to China, Abbie David, the daughter of Foreign Minister Peter David would have been able to identify the 28 Chinese nationals who have been granted diplomatic status by the NNP administration within a 7-year period in office.

He stated that it had to do with someone else within the administration in exchange for “a token of appreciation” which will allegedly go towards the building of the NNP war chest for the next general election.

Prime Minister Mitchell has categorically denied that foreigners appointed to serve as Grenada diplomats are required to pay for the positions.