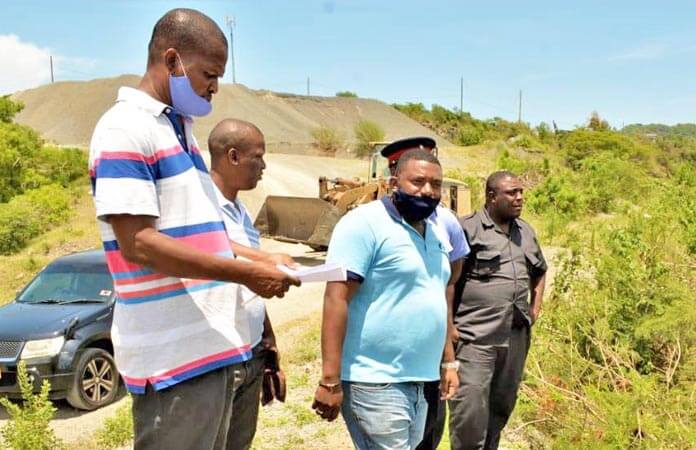 The party of Police officers who visited the Mt. Hartman Quarry

…These people just coming and just bulldoze and come and take our stone as nobody’s business – like they don’t care – we have a serious problem with that.

Those were the words used by Jason Joseph, the Project Manager of a local company now running the Mt. Hartman Quarry in the face of an invasion Thursday into the property by a group of Chinese workers involved in a nearby US$2.9 billion dollar resort investment project.

Joseph made the disclosure less than 15 minutes after a party of police officers visited the compound to investigate a report made by the CCCCI group of operators about a Chinese truck that came onto the property and took away about eight tonnes of stone.

About three weeks ago, THE NEW TODAY carried a report that the Chinese involved in the nearby Hartman Resort Grenada project had an eye on the Mt. Hartman quarry that is now under the control of a local outfit involving businessman, Nelson Louison.

Hartman Resort, which is being constructed as part of the Grenada passport-selling scheme known as Citizenship By Investment (CBI), is reportedly in discussion with government on acquiring the quarry.

The Chinese investors have committed to carry out the project in four phases over the next 10 years with one of them being the building of a health and wellness centre that will cater to locals and visitors.

The Hartman Resort Grenada is also planning to construct a marina in the area.

According to Joseph, the local outfit at the Quarry had to seek the intervention of the police as the Chinese trespassed on the property and illegally removed a number of stones that were set aside for crushing into aggregate to be sold to a number of projects including some being carried out by government.

He said: “At around 10 o’clock this morning, two of the workmen at the Crusher site told me that there was a suspicious truck loading boulders on the land site of the crushing base. When I went down there I saw six gentlemen loading boulders onto a white truck so I decided to tell them to stop thieving the stone. They continued packing the truck with the stones so I decided to block the road.

“I blocked it (on) one side not knowing that the Chinese had cut an external road whereby the truck turned around and exited on the other side and dropped the stone on the Chinese base. The Chinese have been cutting roads inside here where we have stockpiles of boulders to start crushing because (of the) numerous projects for concrete and asphalt work to be done in Grenada.

“…These Chinese just coming and tossing the stones around, making it difficult for us to get the stones up to the crusher plant. Basically the Chinese are trespassing – we have a lease and they are not standing firm with us on our lease – they are just disrespecting us – just bulldozing, coming over with their excavator machine and creating all kinds of different problems.

According to the CCCCI official, the locals now running the quarry are currently stockpiling stones and waiting for an ease in international travel due to Covid-19 for some foreign blasters from the Middle East and Asia to come into Grenada and deal with the stone for them.

“We are just trying to stockpile all that we could in the meantime and until we could get them (the blasters) to come to Grenada and blast the stone.

“We are trying to ramp up production to get the asphalt going and these people are making it difficult for us because where we pack all our stones we have to come back and do it all over again and look for the stone.

“We are trying very much to ramp up production but the Chinese making it difficult for us”.

Joseph disclosed that the local workforce at the quarry are not happy with the behaviour of the Chinese construction workers on the nearby site.

“The workers are very sad because the workers feel threatened with their jobs,” he said.

Joseph described the Mt. Hartman quarry as the only one of its kind on the island due to the quality of stones being produced and from tests conducted it is turning out some of the best stone products for construction work in the Caribbean.

The CCCCI official said he is personally angry with the Chinese since the company has invested a lot of money in bringing back into operation some of the equipment left behind by the Kuwaiti-controlled company known as CCC which departed Grenada earlier in the year after a 25-year stint.

In addition, he said the company has also invested heavily in new machines and equipment for its operation including an Asphalt Plant that is now at another location at Perseverance in the St. George North-west area.

“We have a brand new asphalt plant in Perseverance where we trying to stockpile most of our stones up there right now at this moment to get the road works going and these people (Chinese) just coming and just bulldoze and come and take our stone as nobody’s business – like they don’t care. We have a serious problem with that,” he said.

“We invested a lot of money heavily in getting these machines up and running, providing a lot more jobs – we have close to 300 workers right now,” he added.

Joseph went on: “We have (workers) on the St Patrick’s road project to Mt Fendue, Pointzfield, Hermitage and all these areas there, we are doing all the bridges and stuff.”

According to the Project Manager, the local company has been paying workers overtime in order to help ramp up production in anticipation of the number of government road projects scheduled to come on stream within the next few weeks and months.

He also said that there is growing demand in the private sector for material such as asphalt and chip stone for decoration, and concrete work.

Joseph said that CCCCI is already facing a number of other problems in the Mt. Hartman area with persons who engage in theft of its property at night especially with the loss of copper wire, and batteries from equipment, tools and even water to feed animals.

On the question of the lease in the hands of CCCCI to operate the quarry from government, Joseph said he has seen it and is aware that it is for “a couple years well”.

“We have 40 more years of stone here,” he said, adding that the company is well poised to provide material for a number of projects in the area of repair of roads, concrete work, and many other things.

“If one day Grenada decides that they want to export, we have the quality of stone that everybody wants in the Caribbean because we have the best quality stone,” he said.

The visiting police party spent about five minutes on the Quarry site before leaving to make the trip to the Chinese project as part of their investigation into the complaint.