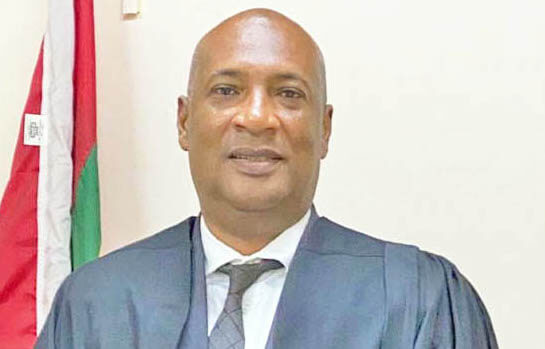 Chief Magistrate Teddy St Louis – forced out of his court

Chief Magistrate Teddy St Louis has been forced to shut the St. George’s No.1 Magistrate’s Court for the entire week and to set new date for matters brought before him for hearing, due to forced relocation efforts to accommodate the Oscar Bartholomew Murder trial at the level of the high court.

A high-level legal source told THE NEW TODAY that St Louis was not happy with the short notice given to him to vacate his court and to move down to the Clico building on Young Street, St George to occupy the space used by High Court No.2.

He said the new location is definitely not suitable for the island’s premier Magistrate’s Court due to its size and the logistics.

He cited a number of deficiencies including the fact that the place is “small and cramped” and will be “a disaster” in terms of trying to accommodate the public who often attend court matters.

According to the source, the police officers assigned to the No.1 Magistrate’s Court at its planned new location will not be able to call out the names of complainants and defendants because it will be interfering with the functioning of High Court No.1 which will be in session at the same time and located in the immediate vicinity.

The Chief Magistrate was reportedly told that persons with matters before his court will be put in a waiting room in the downstairs section of the building and that a police officer will have to come down periodically to bring them up three and four at a time for their matters to be heard.

In addition, the insider said that the relocation of the court has not been Gazetted yet by the authorities to make it legal for St. Louis to hear matters.

Another stumbling block relates to all the electronics which have to be transferred from the No.1 Magistrate’s Court to its new location to facilitate the hearing of juridical matters.

The source said the Chief Magistrate received a call only last week from newly appointed Attorney General Claudette Joseph to inform him that due to construction work taking place at the National sporting stadium which houses one of the high courts, the noise was too much for the conduct of the Oscar Bartholomew Murder trial which was due to start on Monday.

The matter actually started at the court at the stadium last week Monday with the empaneling of the jury before the sitting judge Justice Charles-Clarke who found that the noise level from the construction activities was unbearable and also interfering with mandatory audio recording of the proceedings.

THE NEW TODAY was told that both AG Joseph and the Registrar of the Supreme Court called the Chief Magistrate to ask if he can assist by giving up his court to facilitate the murder trial and to relocate for the time being to the Clico building.

A team from the Registry was spotted on the compound of the No.1 Magistrate’s court on Friday inspecting the premises to check on its state of readiness including the Jury Room and also changing light fixtures in order to facilitate the Oscar Bartholomew murder trial.

The court now occupied by the Chief Magistrate was once used as High Court No.1.

However, a few years ago, a female High Court judge took the decision not to sit in the building after complaining of problems with mold and other health concerns.

The source said that a disturbed Chief Magistrate St. Louis had asked AG Joseph and the Registrar to look at other alternative places to accommodate the murder trial like the Annex of the Trade Center, Olympic Centre, and Youth Centre building in the south of the island.

St Louis was told that they did inspect the buildings but found them to be inadequate to hear the scar Bartholomew case.

THE NEW TODAY understands that the staff attached to the No.1 Magistrate’s Court were not happy and became very upset over the impromptu notice given to them to move to the Clico building.

According to the source, the Chief Magistrate and his staff could not even get into the No.2 High Court last Friday to make preparations for the sitting on Monday as the high court judge there was still hearing matters in the building.

He alluded to a number of problems affecting the attempted move of the St. George’s No.1 Magistrate’s Court such as staff shortage, and the ability to type and print documents as part of the daily routine.

He said that whenever a decision is made by the Chief Magistrate in a matter, the Staff will often have to immediately proceed to prepare warrants, summons and in some cases the preparation of Protection Orders and the facilities to accomplish these things are not in place.

The high-level legal official charged that the Clico building “is definitely not suited for the public” when it comes to matters to be heard at the Magistracy level.

He foresees a lot of problems on days when the court has to deal with matters involving Child Maintenance, Juvenile cases, and Family day when about 60 persons will be visiting the court for these matters.

“Where will these people be staying in Clico building? It is just not suited or appropriate for a Magistrate’s Court. You have to be calling names loud and that can’t happen. The judge made it clear that they can’t call any names. So a policeman will have to go down and quietly ask the people we are looking for John, Dick and Harry and get them and then bring them up,” he said.

According to the source, this will be very time consuming and very restrictive in terms of the number of cases that can be heard daily by the sitting Magistrate.

Another obstacle for the relocation of the No.1 Magistrate’s Court is the movement of thousands of case files and that some things can easily get lost in the process.

“The Magistrate’s Court has hundreds of case files and in the movement and those things that’s when things get lost. That is a challenge they will have. Documents are susceptible to getting lost, misplaced. One little file can fall off the seat within the vehicle and they are important cases and what happens,” he said.